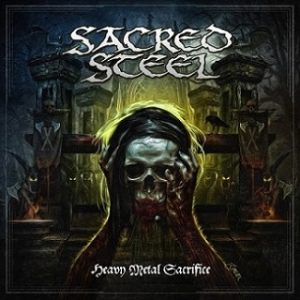 German heavy metal battalion Sacred Steel have been relentlessly and defiantly going strong since the mid-’90s. Formed by members of cult doom bands Dawn Of Winter and Naevus, they have survived and ignored many different musical trends that have come and gone since their inception and have instead been firmly focusing and looking to the early to mid-’80s heavy metal scene for musical inspiration and with this, their ninth studio album, their approach hasn’t changed. Their refusal to bow to trends has paid off as they are now reaping the rewards in a musical climate which is much more favourable to that style of heavy metal, although in Germany such a music style seemingly never went out of fashion… even in the dark days of the modern metal plague.

‘Heavy Metal Sacrifice’ showcases a band who have clearly spent years honing their sound and mastering their musical craft; the riffs gallop along like a rider going into battle and are as sharp as steel blades with some tasty duel guitar sections interspersed throughout. The rhythm section rolls along like a thundering double bass-fuelled juggernaut and the vocals of frontman Gerrit are as charismatic and wailing as ever, his voice sounds in fine form and he hasn’t lost any of the high end of his easily recognisable air raid siren vocal attack. Although his style is an acquired taste but, then again, the same could be said for some of the best heavy metal vocals and vocalists of the ’80s.

Sacred Steel have delivered a powerful, punchy album and are valiantly fighting the cause for true heavy metal and have made a loud triumphant battle cry with this latest opus. Wimps and posers will be slain and sacrificed to the wargods of metal. Heavy metal reigns victorious!