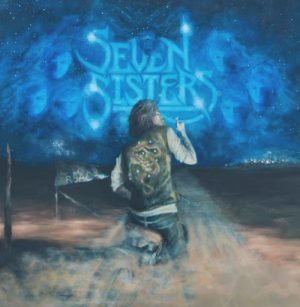 Underground heavy metal trends ebb and flow as regularly as the waters of the Thames. One minute, your local gig is packed wall to wall with identikit war goats in Blasphemy back patches, the next minute they’ve grown dreadlocks over night and formed bands with “bong”, “wizard’ or both in the title. The last few years have seen NWOBHM era increase spectacularly in popularity. Suddenly, a bunch of kids barely out of short trousers had sprung up, claiming that they all got their inspiration from an ’82 sheffield band that only released one demo tape to 15 people before quitting music forever.

Context is important, because given this current state of affairs, it would be easy to take one look at Seven Sisters and write them off. Spandex, twin guitars and Virtue covers are after all, a regular part of their live offering. To do so though would be a mistake however, because it would mean missing out on one of 2016’s best metal albums.

Opening with ‘Destiny’s Calling’, it’s immediately obvious what the M.O here is, with a twin guitar lead giving way to a fast paced track reminiscent of early days Iron Maiden. The production is solid, but with a raw edge that harkens back to the bands Seven Sisters are so obviously influenced by. It’s a stylistic signifier that sets the tone for the rest of the album, harmonic, melodic and heavy.

As the album progresses, the scale of songwriting becomes apparent with each song having it’s own clear distinct style, held together thematically by the strong sense of concept that underpins the record. No two tracks sound the same, with each having a strong sense of narrative, unfolding in both the lyrics and the instrumentation. This sense of story telling gives an immediate sense of engagement and draws the listeners fully into the world that Seven Sisters have created.

At the half way point, title track ‘Seven Sisters’ kicks in with a slower, grander sounding intro opening up into a progressive track that defies expectations of where it’s going next across its seven-plus-minute run time After a lengthy and more restrained instrumental section, the track kicks back into gear for a massive finish that will no doubt become a hallmark of their live shows.

It’s moments like this that elevate ‘Seven Sisters’ way beyond the efforts of their contemporaries. What the band demonstrate consistently is a mature approach to songwriting, where the hooks, melodies and riffs are deployed in a restrained and strategic way. It means that each song has it’s own unique ways of getting under the skin, demanding the replay of the entire album. It’s a technique indicative of a band confident of their abilities, happy to hold back on the good stuff, rather than repeat one good idea or riff relentlessly.

Whether you’re a regular at Brofest, or you’d never be caught dead in a denim jacket, this is an astonishingly accomplished and well put together debut album. The level of musicianship, song-writing and vision on display are well beyond what would be expected from such a young band and anyone with an appreciation for heavy metal with a sense of melody, energy and fun would be well advised to pick this up.