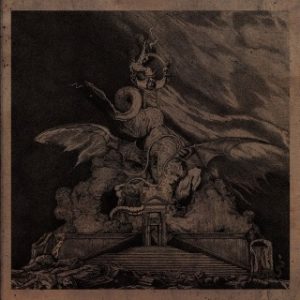 These Norwegians deal in devilish death metal demonancy and their latest full-length will drag you to the very depths of their dark murky musical malevolence. The songs twist and turn like a serpent slowly coiling it’s way around it’s prey. The blackened tremolo riffs slither out of the speakers and entwine themselves around the song structures, the drums mercilessly pound and crush, the bass bludgeons your senses and deep, deathly growls and hellish, harsh howls complete this dense wall of savage sonic wickedness.

There is a very effective use of tempo changes in these incantations, which keep the whole listening experience interesting from start to finish as the songs slowly unravel and reveal themselves upon your ears, sounding very much like a bestial, bastard offspring of Morbid Angel, but with a definite black metal influence running through it’s veins.

There are also very atmospheric, dark, ambient interludes throughout, which makes their dark death metal sound more demonic. These are occult ritualistic musical rites that will take your soul into the light-devouring aural abyss.

If a demonic entity was to manifest itself in musical form, it would probably take the shape of Shaarimoth. This is an album forged in the purest fires and born out of dedicated devotion to the gods of darkness and chaos that reside in the realms of death, beyond this mortal coil. Are you ready to enter the temple and be initiated into their latest ritual? This is majestic and malevolent in equal measure.