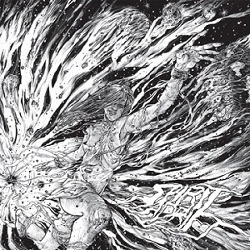 Okay, so we’ve had one man black metal, now dawns the age of one man doom metal; Spirit Adrift is the brainchild of Arizonian Nate Garrett and following the release of EP ‘Behind – Beyond’ is his debut album ‘Chained to Oblivion’. What’s most immediately striking about this release is the sheer skill that has gone into writing and creating each song – from the crisp, clear cut enormity of the riffs, the methodical and steady beat of the percussion to the haunting vocals and lyrics.

The production quality is absolutely pristine and it would not be surprising for most people to pick up this album and assume it’s been created by a full band – there’s not a hint of the biscuit tin quality recording of most solo efforts. Each song is masterfully crafted with a powerful beauty – this goes far beyond the realms of bog standard doom metal and into something that’s thoughtful and emotive.

Clocking in it at just over 45 minutes, it doesn’t outstay its welcome – this will be an instant hit with fans of the likes of Pallbearer and While Heaven Wept, as it gets to the point, while still making a huge and lasting impact. Hankies at the ready!