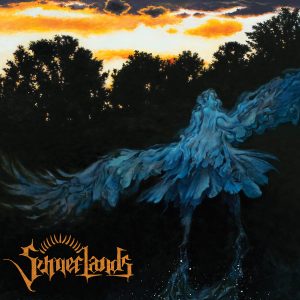 Two years before, a band under the name Sumerlands  appeared on Bandcamp with a three-song digital demo. From the first notes of ‘The Guardian’ we foresaw that something special was brewing, and then a familiar voice sent shivers down the spine… Mr. Phil Swanson, one of our favourite singers of the last decade. Known as the voice of Hour Of 13 (one of the best orthodox doom bands of the past decade), he has participated in many more class A acts, from Atlantean Kodex, Briton Rites and Upwards Of Endtime, to Seamount, Vestal Claret and Lords Of Triumph, just to name a few.

The tone of his voice is like an epic Ozzy with profound power and his performances are always great. In this band, he collaborates with Arthur Rizk, the miracle boy; guitarist, drummer, composer, producer, an important part of bands like Eternal Champion, War Hungry, Power Trip and more (we can’t imagine what else he will do in the future…). In ‘Sumerlands’, Arthur takes care of guitars and production. Everything sounds very confident, Arthur is a technical know-how freak. Starting with the sound, there is a warm and organic production, and along with the songwriting, the performance of the whole band and the aura of the album, we are happy to welcome a nostalgic ’80s heavy metal masterpiece harking back to Jake E Lee era Ozzy, W.A.S.P, Dokken and Queensryche.

There are no fillers here and the length of ‘Sumerlands’ is perfect for a beautiful vinyl analogue offering. Catchy, inspired, riff-driven and passionate, this is the kind of heavy metal we are looking (and praying) for. We were sure that this would be Great, but the final result is a revolution. The future belongs to Sumerlands. They only need to grab it and lead us to their vision.