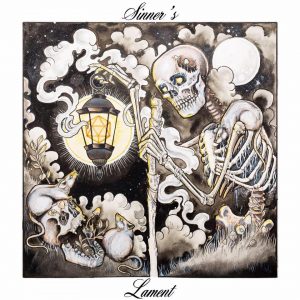 As far back as 2011’s ‘The Light Of Which I Dream’, Tasmania’s Taberah have embraced experimentation. However, there’s always been an inkling that the sound they wanted was just out of reach. On ‘Sinner’s Lament’, the band appear to have hit that mark. With Lord Tim (LORD, Dungeon) producing, the band’s rock-n-roll-meets-power metal sound is taken a step beyond. Duets, ponderous acoustic passages, orchestration and a few punchy bass fills bring the band’s sound to another level.

These additions only serve to make the heavier sections more impactful. ‘Wicked Way’, ‘Child Of Storm’ and the anthemic ‘Heal Me’ all bleed the kind of power-thrash sound that Australian metal has become known for recently. In addition to the band’s previous flirtations with Queen, Motörhead and The Darkness, this record brings in traces of Running Wild, RAGE and…W.A.S.P.?! Hey, it works!

From the cellos across ‘Dance Of The Damned’ to the why-does-this-work cover of ‘Hotel California’, Taberah have taken themselves to another level. As always, harmonies, fierce drumming and feel-good riffs abound. But it is complimented by an array of sounds previously beyond the band’s scope. Some choices might be divisive, but the world domination this record could bring is worth the sacrifice.