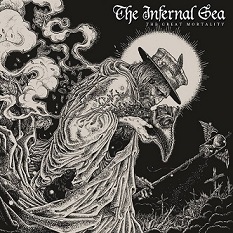 Alongside the debut full-length from The King Is Dead, this sophomore full-length from The Infernal Sea marks the third wave of Cacophonous; something that, what with the release of the original recordings for the ‘Dusk And Her Embrace’ album and these two opening gambits looks like being a far greater success than the label’s second revival in the early noughties.

Returning after 2011’s ‘Call Of The Augur’, The Infernal Sea have invoked the Black Death, the all-consuming plague that swept across the UK and continental Europe from 1348 as the lyrical concept for the album, and if opener ‘Den Sorte Dod’ provides the scene setting, off-kilter dissonance and depleted speed, then ‘Way Of The Wolf’ is the track that firmly stamps ‘black metal’ over the album and harkens back to the classic sound of the mid-’90s, yet it’s ‘The Bearer’ that provides both band and album with the exceptional twist; the predominantly decreased pace and dissonant guitar work is a suitably bleak setting for the maudlin vocal screams and hauntingly sombre violins that take centre stage. Superficial is not a word that could be applied to any song on the album; the meticulous methodology of the songs and lyrics do not divulge their full secrets on the first listen – this is an album that provides a journey that needs to be taken a number of times.

There’s certainly a nod towards Cradle Of Filth’s early years application of a uniquely British slant onto black metal (both from a conceptual standpoint and also the soundstage that leans toward the grandiose), but The Infernal Sea have created an album that takes in classic metal in a number of forms, given it a darkly distinctive take and produced an album that demands repeated and involved listening.