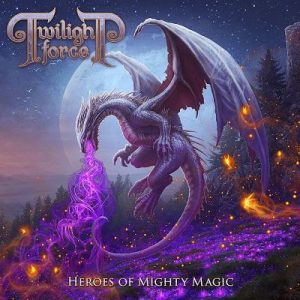 Modern heavy metal suffers from a serious case of taking itself too seriously. Music, like all art and culture, is reflexive to the wider world. In the 1980s, a generally positive Western world lost its collective shit to Madonna and Cyndie Lauper, while the ’90s brought Cocaine and Britpop to a New Labour generation that saw itself as invincible. Cut to 2016 and what can be said? We live in a divided world where people are too busy tweeting about pronouns, Antifa and Donald Trump to remember to just have fun.

This is reflected in the heavy metal subculture. The rise and rise of extreme metal has eclipsed all the other metal sub-genres from 2010 onwards. The game now is about who can buy the Dark Descent vinyl before it sells out, who can pretend to like the most obscure black metal band possible and who can thesis and counter-thesis why a guy in his parents’ basement in Ukraine writing roleplaying songs about racist vampires is serious business.

Thank fuck for Twilight Force! Having released debut album, ‘Tales Of Ancient Prophecies’ in 2014, these fantasy-obsessed Swedes quickly gained attention for playing 2000s power metal worship of the sort that hadn’t been heard since Gods like Luca Turilli, Blind Guardian and Sonata Arctica were in their prime. While that album was an incredibly well-executed tribute to the millennial power metal sound, follow up ‘Heroes Of Mighty Magic’ arrives two years later and demonstrates a band finding confidence in their own sound and having absolutely no fear about bringing the fun back to metal.

Opener ‘Battle Of Arcane Might’ kicks things off with a very good preview of what’s to come, offering immediately obvious songwriting progression from the debut’s tracks. There’s an orchestral quality that is immediately apparent and the sophistication of the composition comes straight to the front of the sound.

As the album gathers pace, this maturation in songwriting becomes more and more evident. The best way to explain it is to say that this is a thoroughly cinematic album, with each song telling it’s own story through the use of progressive song structures and a willingness to embrace different tonal languages and timbres. The band have previously said that they consider the label “Disney-metal” to be a compliment, and you can see why, when none of these songs would sound out of place on a movie soundtrack. It’s the same feat achieved by Blind Guardian on ‘Nightfall On Middle-Earth’; when a band manage to create an entire world out of their music that the listener can get completely lost in.

‘Heroes Of Mighty Magic’ also sees the band write their first epic tracks, with ‘There And Back Again’ (which somehow manages to not be about Tolkien) and the title track both clocking in over the eight-minute mark. Both tracks feel like peak Twilight Force and the heart of this album, offering a compelling narrative drive, packaged in superlatively executed power metal. The tracks work their way through a complex arrangement of passages, returning throughout to bombastic choruses that lodge themselves straight into part of the brain that demands head banging and immediate repeat listening.

This is an absolutely incredible album from start to finish. Each song stands on it’s own as better than most power metal bands write in their lifetimes, but put together, you have one expertly executed coherent whole that deserves unbridled praise.

Lots of people will look at the costumes, artwork and themes of the band and turn their noses up because they don’t think it’s “cool enough’”. These people are idiots and missing out on the best heavy metal album of 2016.