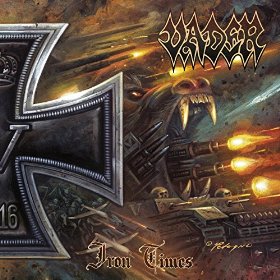 By the time you read these lines, Vader’s 13th album, ‘The Empire’ will be available in stores. ‘Iron Times’ is the amuse-bouche for the album, with a basic but proven solution: two tracks from the upcoming album, and two covers. The two new tracks show a rather usual and straight-forward Vader, maybe not as fast as usual, adding more heavy metal touches to their blend, and actually sounding more thrash than death metal, with a huge (and proper-quality) Slayer touch, both in riffs and solos.

And what about the covers? The first one is a catchy Panzer X track (so Peter covering himself then); pretty much a hybrid between hard rock and ‘stadium’ thrash/power, with killer Polish vocals. And the second is Vader’s homage to Lemmy, with ‘Overkill’. All in all, ‘Iron Times’ is a decent, but is far from being Vader’s most standout release. It’s nevertheless a die-hard EP adorned with really cool ‘Head-tastic Petagno artwork that should get a proper place in Vader fans’ collections.