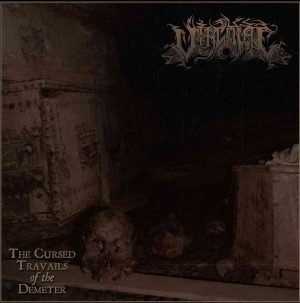 One of the Irish metal scene’s most original and inspiring new bands, Vircolac do not disappoint with their latest killer EP, ‘The Cursed Travails Of The Demeter’. Released by Sepulchral Productions and Dark Descent Records, just one year after their acclaimed ‘Codex Perfida’, this latest offering is an extremely well-formed and measured take on the classic blackened death metal style.

‘Cursed Travails…’ is a haunting work, based around a gloomy horror story concept. Across only four songs and 26 minutes, the unrested souls of Vircolac takes us on a journey by sea, as passengers on the doomed Demeter ship, the vessel that carried Dracula on his accursed journey to England, according to Bram Stoker’s classic tale.

Following the same narrative line through all the four songs, which flawlessly flow one into the other, the EP combines an atmospheric tone with heaviness of guitar rhythms and sophisticated modern shred sections. ‘The Cursed Travails Of The Demeter’ also has a doomy ambience without succumbing to the genre’s more clichéd pitfalls.

This unique stylistic approach combines well with the horror theme of the EP. It’s a captivating nightmare which takes the listener on a musical journey almost as a feature film would do. This is definitely an admirable release from this still growing discography of this most exciting Irish band.