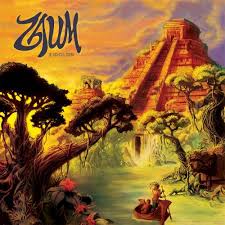 An idealised person or thing – ‘eidos’ – form. A spectre or phantom – eidōlon. Either one of these definitions is befitting of second album ‘Eidolon’ from Canadian duo Zaum. Their sound encompasses the enormity of the likes of Sleep and Om, yet works in a mysticism that’s haunting and ethereal. The 40 minute span of this release is a sitar driven daydream that carries the gravitational force of tectonic plates shifting. Densely layered instrumentals lay the foundations for strikingly intense drone soundscapes.

Drone often falls back on its amp stack to do the talking, however, Zaum display an impressive vocal range, utilising both shamanistic chants and heavier, stoner growls. The guitars, drums and ethereal, reverb heavy vocals move at a glacial pace which inspires both delight and frustration. If you’ve heard the debut, then this is pretty much more of the same, however, in the two years that have elapsed since their debut their sound has really been finessed, making this release all the more enjoyable.