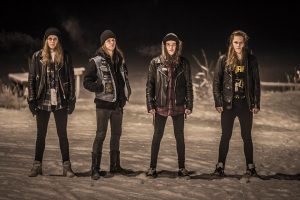 “The songs came the same way as usual, just jamming around riffs and so on,” explains guitarist/vocalist Samy Elbanna, sobering our conversation by discussing ‘Terror Hungry’s writing process. “The difference was the riffs became a bit more technical because we’ve progressed on our instruments. But we didn’t have any plans to make this-or-that kind of song; we just wrote 13 killer tracks that made … Read More