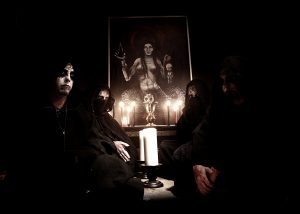 It is also said that to be a ‘proper’ black metal act you have to be from Norway. Sure, the second wave kicked off there with hordes of painted faces, standing topless in frost covered forests, holding inverting crosses, pledging their souls to Satan and burning down churches. It all made for quite the spectacle, making headline news stories of the corrupted youth. It put Norway on the musical map, but could the genre be facing a the problem in that the now-truest black metal bands are being overshadowed by poster-friendly acts like Dimmu Borgir, Satyricon and Burzum?

The fact is that black metal is no longer the sole domain of the Norwegians [ed – was it ever?]. There are bands out there that are plying their trade devoid of gimmicks, but their success is being stifled by the spectre of the chart-friendly Norwegians that looms over them. We only need to look at Finland, bands like Behexen, Beherit, Archgoat and Sargeist, Sweden with Watain, Marduk and Nifelheim, Judas Iscariot, Krallice or Von from the USA, Deathspell Omega and Blut Aus Nord from France and even Drudkh from the Ukraine – every single one of them stays far truer to black metal than any of their bigger Norwegian counterparts who along the way forgot what the genre was meant to be about.

“The attention has gone to the circus clowns like Satyricon who are incorrectly connected to black metal,” claims Hoath, vocalist and co-founder of Behexen. Hailing from Norway’s neighbours, Finland, the band have avoided the constraints that the title of Norwegian Black Metal would have shackled them with, giving the band musical freedom, and also a true path of Satanism, without the accusation of “gimmick”.

“I was born as a descendant of Samael,” Hoath boasts. “The direction of my path has been written in my blood. It’s the burning path across the darkness, through the bloody gates of Lilith, towards the enlightenment of Lucifer. Occultism, the great work is the centre point of my whole life, and the only reason why I am still here, and the sole reason why Behexen exists. In a ceremonial ritual in 2010, my life changed when Ama Lilith came forth. She threw me into the black shaft from where it took me more than a year to rise. It was the baptism and the rebirth. Every occultist has to go through Her bloody gates. Since then I’ve been serving Lilith, the other side of Satan’s star and her troops.”

For the uninitiated this may sound extreme, to the sceptics this may sound like they are playing up to black metal expectations, but that could not be further from the truth. Having completely devoted his life to Satan, Hoath has nothing but disdain for those who use it as a shock factor, saying; “I truly hope, that all these liars would be revealed one day, in one way or another, and they’d be coldly hanged on the nearest tree.”

Revealing to Iron Fist that he was suffering from ill health at a time which could have impacted on the work and recording of their new album, this didn’t stop the creative process or the dark energies from flowing. “My body is a sword of Satan,” counters Hoath. “I want to keep it sharp. I do that by lifting weights. I’ve been cultivating the unholy powerlifting for 15 years already, and I wouldn’t know how to live without it. The creation process of [new album] ‘Nightside Emanations’ was the heaviest that I’ve never experienced. The spiritual charge that I shed into it on a personal level was so big, that sometimes I needed to collect myself together all over again.”

Behexen’s approach to creating and recording comes together organically, and the band feed off each other’s vibe. “We’re the cult, brotherhood of Satan, not just a band,” Hoath proclaims proudly, and there is definitely something more between these individuals than a shared passion of music, and this bond between them means that “the new album is more intense, more gloomy, more catchy, better In every way.”

For those familiar with Behexen it might be difficult to comprehend how the Finns have been able to push things further, how they’ve managed to make things darker. As Hoath explains, “We have new blood in the band and I know that it’s awoken new serpents within us.” These fresh injections come in the form of guitarists Wraath and Shatraug who both joined the fold in 2009, a year after Behexen’s ‘My Soul For His Glory’ album and their split with Satanic Warmaster. Guitarists Reaper and Gargantum left in 2009, clearing the way for Wraath (Dark Sonority, Mare, One Tail, One Head) and Shatraug (Horna, Sargeist, Black Stench). There is a refreshed focus in the band and Behexen are looking at performing live and have already started working on new songs for their next record.

With so much energy being poured into this album it would have been easy for Behexen to churn out just another album, especially as they have been kept waiting for four long years since 2008’s ‘My Soul…’. However, Behexen would never sell their fans or themselves short. The art that adorns the cover of this latest record was painted by K Lehto (Crimson Wine), and was born from a deep, life-changing event in Hoath’s life. “My blood has been shed into [the cover art] and it wasn’t born easily. I followed the creation process of the painting almost every day and that way I got it to be just the way I wanted.

For a band as prolific and outspoken as Behexen it would be foolish to deprive them of the closing words, and even more foolish to ignore their commands. “Come to our shows and take part in our black magic! Hail Samael! Hail Lilith!”