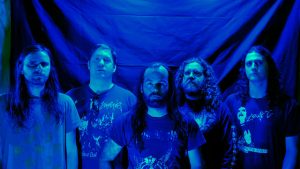 Bastard Sapling could easily be described as the best American black metal band you’ve never heard, but this would be selling them short, they’re the best black metal band from anywhere that you’ve never heard of.
Formed in 2007 by ex-Cannabis Corpse guitarist Drew, who was in need of a new direction to channel his energy and aggression after being left without a band and living in squalor, He was joined by drummer Elway (ex-Celebrity Murders, ex-Murdock and ex-War Torn), guitarist Steven (Inter Arma), vocalist Mike (Inter Arma, ex-Dick Butkis) and bassist Peter (Battlemaster). The quintet plays brutal black metal in the truest of senses, stripping away all pretence, gimmicks and other nonsense that gets in the way. The raw beauty of Drudkh, Immortal and early Enslaved pulses through their veins, but these Yanks they have their own voice, and it’s fucking loud. They’ve spared no time in tearing the scene apart since they made their first unholy appearance at 2008’s Heart Of Winter festival in Richmond, Virginia. Here they made available a raw rehearsal demo and this exposure saw them head off on a nationwide tour, to conquer new turf and corrupt the minds of the innocent. They quickly followed this up in 2010 with ‘V: A Sepulcher To Swallow The Sea’ and these two brief recordings only served to whet our appetites, but our patience is to be rewarded this October as Bastard Sapling are set to release all kinds of evil upon the world with their first full-length, ‘Dragged From Our Restless Trance’ on Forcefield Records.