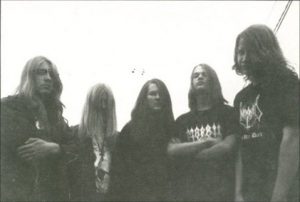 Over the years, rumours of an official re-release of the band’s scarce recordings were floating around while, in the meantime, their former vocalist Jukka Kolehmainen set to open an official memorial website where one could download for free their two official recordings to counterfeit bootleggers. That is until May this year, when Svart Records finally released their officially-sanctioned 16 track (21 if you fell for the vinyl version) discography ‘Completely Vulgar’, compiling both their EP and demo plus live and rehearsal odds ‘n’ sods. Thus, Jukka Kolehmainen agreed to take us back to those sweet teenagers years when rehearsal places did reek of cheap beer and pranks, and death metal was still in its infancy.

When did you first have an idea to compile all those early Abhorrence recordings?
“In the early 2000s, I think. At some point there were about fifteen labels, big and small, offering to help. Most were just looking to put the demo and EP together with the official stamp of approval on them but only Svart Records went the extra yard by making it comprehensive, so it would cover everything we ever recorded and make it sound as best as possible.”

Since you’ve personally uploaded both your demo and EP onto your website, one could say why bother in the first place?
“Take a listen to those downloadable files if you will: they’re from crappy quality sources and further more they’re in lousy MP3 format. Now take a listen to the ‘Completely Vulgar’ versions of those same songs and you will probably see why we bothered.”

Let’s go back to where it all began…
“Kalle Mattsson [guitars] was the youngest of the bunch since he was only 15 years old. I was 17 and rest of the guys were 16. I had few bands before Abhorrence, like Rebirth and Disaster, somewhere in between speed and thrash before moving towards a full-on thrash sound. Tomi Koivusaari [guitars] had quite a long history of bands behind him already. I think the first one he was involved in, he was only ten or something, although his first ‘serious’ outfit turned out to be Violent Solution, a thrash squad with whom his future Amorphis colleagues Jan Rechberger and later Esa Holopainen also played in.”

When did you all meet?
“I’ve been friends with Tomi and Kalle since we we’re 13, as we were at the same school. There weren’t too many metalheads, so we all knew each other. Jussi ‘Juice’ Ahiroth [bass] and Kimmo Heikinnen, our first drummer, lived in the next town over, but again, metalheads tended to know each other from gigs and such. This being said, there were almost no death metal bands in Finland, so we were pretty much on our own.”

How did you end up doing vocals instead of playing bass?
“I guess it just sort of fell on my shoulders to handle the vocal duties. I sung, well, screamed anyway, in the previous bands I was involved in and my bass artistry was not on the level with the requirements of the band. In other words, I couldn’t play it at all! I also figured out quite quickly how to get really guttural sounds out, which made the decision even easier. I have to admit that for the first few months I really raped my throat with no technique and pure power. It took me a while to realise how to make deeper sounds without shouting at the top of my lungs.”

Why did you settle for the name Abhorrence?
“We probably had names ending in -ion, which was all the rage back then. We choose Abhorrence because it sounded rather cool, fit snugly with our lyrical themes but also because we already had a gruesome logo ready very, very fast.”

Who designed your very first logo?
“Juice did! We thought it was so fucking cool that we didn’t even want to think about changing the name anymore.”

Your first proper recording was the ‘Vulgar Necrolatry’ demo in February 1990. What memories do you have and were those three songs the first ones you had written for the band?
“It was extremely fun, even though we had to do it in a basement studio. It was run by this jazz guy who probably only had it so his jazz band could demo and record stuff. Since he had never heard anything like this, he didn’t know what to make of our sound. I mean, we actually played all guitars through my Fender combo bass amp, used lots of guitar effects and tuned way fucking low! Indeed, those were the first songs we had come up. Tomi took care of most of the music, even if Kalle and Juice contributed to ‘Pleasures Of Putrid Flesh’, and Juice did all the lyrics.”

Weirdly enough, your next recording, a four track 7” ended up being produced by Stratovarius’ Timo Tolkki. It seems like an odd partnership to say the least…
“Actually, I think we were the first extreme metal band Timo worked with [he since worked with Funebre]. The reason for this arrangement was simply because he was a friend of the band, was familiar with heavy metal and remained quite affordable. Some of us spent many a weekend at his place, listening to some raw edits of the new Stratovarius stuff and old gems from his LP collection, drinking beer and having a good time. And believe it, he was aware of what was bubbling beneath the underground and about the rise of extreme metal. Still, I remember him saying once we were in the studio that what I was doing was against everything he’d been taught about recording techniques and what a proper sound should be like! I think he liked the fact that the raw sound supported the raw music and he had a lot of fun doing things ‘wrong’.”

How was your first gig?
“I don’t remember the date but I’m quite sure it was one of those youth centre gigs we often did, as we were underage and most pubs or clubs wouldn’t have had metal gigs anyway. I think we had only few songs ready so we played them all twice! We might have played Morbid Angel’s ‘Chapel Of Ghouls’ too, but I’m not totally sure about that. We also covered Bolt Thrower’s ‘World Eater’. This being said, we never did play covers that much, we started making our own music straight off the bat and only played music by our favourite bands in rehearsals.”

You were together about 15 months, right? Did you play live a lot?
“I’d estimate in between 15 and 20 [gigs]. My favourite ones happened in Kino Sampo at Riihimäki and at Lepakko in Helsinki. The trip to Norway was also really great, but I don’t really have too many recollections from the gig itself, strangely enough [ed – too much booze?].”

Speaking of which, is it true that you ended up crashing at Mayhem’s rehearsal room?
“Yes, it’s true. We were in contact with the Cadaver guys who did the gig with us and since they had to house us somewhere, Mayhem volunteered. They had a bit of a party going there and I remember talking with [Slayer editor] Metalion and Dead, as well as Euronymous. I also have recollections of them jamming in their rehearsal room and being very impressed with the bass sound, really powerful and with quite a heavy low-end. It was an eerie night, loads of beer and pranks if one passed out. Well, they saved us from pranks, but warned that if we were ever coming back, passing out would result in instant pranking.”

Who pulled the plug on the band?
“It was a decision Tomi and Juice made, basically. And I heard about it when I called Tomi to ask if we had rehearsals anytime soon.”

Relapse snatched up Amorphis after he initially had contacted Tomi to sign Abhorrence and even asked them to do a rendition of your own ‘Vulgar Necrolatry’ for their first EP. Are you mad at Amorphis for having stolen your thunder?
“I never saw it like that, no. One always wonders ‘what could have been’, but then again, I was asked to join Amorphis at an early stage and I turned it down. And by the time Relapse got in touch with Tomi, Abhorrence had already split up.”

Tomi still plays in Amorphis, your second drummer Mika Arnkil is now doing bass for Impaled Nazarene but you never bounced back, apart from doing a guest appearance on Stench Of Decay 2009 EP ‘Where Death And Decay Reign’…
“I did have some projects, but they never recorded anything and by 1994, I was so fed up with death metal, where everybody were starting to sound alike, that I went to the other extreme, doom metal. I also found bands like Kyuss, who were heavy in their own style, so it was really natural way to leave all that behind. It took me over ten years to get back into death metal. Vallenfyre was the band that really hit the spot, but Finnish contemporary bands like Vorum and Swallowed also made an impression.”

Last but not least, the $666 question: will there ever be some kind of reunion?
“We’ve talked about it and I guess the collective agreement is that it’s not impossible. We’ll see, who knows…”