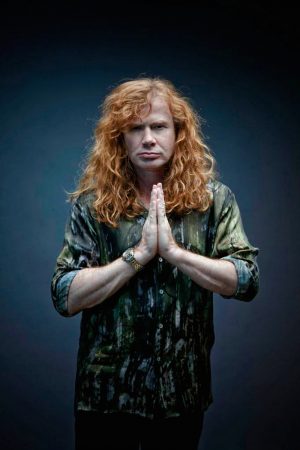 It was obvious right from the outset that Dave had something of a predisposition to act like a prannet in interviews and onstage, and to start with his pronouncements, be it endless doggerel on his drug habit or in one case some particularly baffling talk of bedding unfortunate young ladies in his youth by means of a ‘sex hex’, could be shrugged off as part of his bigmouth image, as ever making for good copy for the metal rags. What’s more, it’s rare that a metal figure’s personal beliefs stop one wanting to listen to their music-anyone who’s struggled with the disparity between the asinine ramblings of Varg Vikernes and the power of Burzum’s music (at least while his music was still up to scratch) will testify to this.

Yet more recently, the litany of horrors has gone off the map. Controversy is one thing (if not a polite euphemism for idiocy) yet bigotry, intolerance, and lunatic right-wing conspiracy theories are something else entirely. Indeed, never has there been one figure who’s made us wish so ardently that musicians would stay out of politics.

Moreover, Dave’s persona has always been so tightly bound with the experience of listening to Megadeth that it’s almost impossible to shrug these indignities off, especially when the recent ‘Endgame’ album, for example, is largely based on the concepts of a paleoconservative talkshow host with whom Mustaine will regularly chew the fat on air as regards his theories on Barack Obama’s ‘real’ birthplace.

It’s a depressing realisation to come to 25 years from the first time ‘Wake Up Dead’ graced this fan’s stereo; that the uncompromising maverick we idolised is more a pampered, paranoid crybaby-bellyaching risibly that his apparently unconscionable failures (30 million albums sold to date) are down to him dabbling with ‘black magic’ as a teenager. That the paragon of extremity who baited the PMRC and used shock-horror lyrical motifs to thrill his youthful audience has now curdled into a bitter, self-righteous born-again-Christian who passive-aggressively ousts bands like Rotting Christ and Dissection from festival bills. Indeed, the realisation that much of classic Megadeth’s apocalyptic anti-government sturm-und-drang ultimately just amounted to so much voguish thrash metal window-dressing, disguising an egomaniac textbook rock star with only the vaguest contact with the reality he purported to advocate, not to mention one whose worldview makes David Icke look like a paragon of common sense. Yet as this former fan flogs his Megadeth records in disgust, the only conclusion I can come to is that it gives me a migraine headache, sinking down to his level.

Talent be damned; you would’ve kicked him out of your band too.