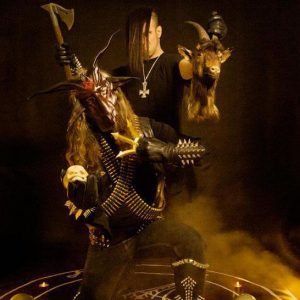 “The funny thing is that I’m not even a doom fan at heart! I’ve been playing in bands since 1987 in many different sub-genres but somehow the only ones who really had an impact were in the doom category. But believe me, Satan’s Wrath is a whole different beast!”
Indeed, less than a minute into debut album ‘Galloping Blasphemy’, ‘Show No Mercy’ era Slayer, Bathory and early Celtic Frost spring to mind more than Black Sabbath’s heavy stampede and samples of rainfall and thunder in the distance. But such expectations are understandable, because besides having impressive facial tattoos, it’s with bands falling into that doom category – first, with the short-lived but awesome Great Coven and Eight Hands Of Kali and then with Electric Wizard – that the Greek-born Taz Danazoglou really made a name for himself.

Despite being spawned right after his exit from the Wiz, Satan’s Wrath is not just a way for him to reconnect with his roots though. “I’ve been playing in bands for a quarter of a century so I didn’t even considered stopping now,” Taz says. “I was always first and foremost a heavy and thrash fan so I wanted to pay tribute to the metal from the ’80s I grew up with, like Slayer, Possessed or Iron Maiden, when the frontiers between heavy, black or thrash didn’t exist yet. But the problem was that I couldn’t seem to be able to find the right musicians. All this music kept pouring out of me, so in the end, I started demoing everything myself. Then I reconnected with an old friend of mine, Stavos K, who was Greek like me but who had moved to Berlin. Since he is a brilliant guitar player, but also of the same age and with the same taste in metal, he fit like a glove and we soon finished the album in no time.”

With provocative promo pictures and devilish song titles (‘One Thousand Goats In Sodom’ or ‘Slaves To The Inverted Cross’) Satan’s Wrath possess an uncompromising, hell bent for leather attitude and Taz doesn’t even hide it: “I don’t like those bands who ‘progress’ so much that they lose touch with what they initially sounded like. According to me, a metal band has to have Satanic or heroic fantasy inspired lyrics, end of discussion! As for those items you can see on the photo, including that goat mask, they’re all from my house so believe me, this is no pose!”

Currently “caught in a whirlwind”, as he puts it, putting together a full line-up so Satan’s Wrath can start playing gigs in a near future, Taz also reveals that the next album has already been fully demoed, and Mercyful Fate freaks will be delighted that they’ve come up with what could be their own ‘Satan’s Fall’, a “twelve-minute long track with acoustic and epic parts. It just shows that out debut was only the beginning and that there’s much, much more to come.”