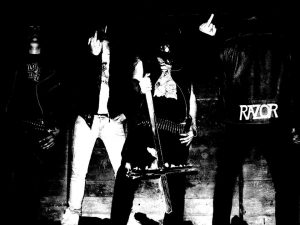 Norway’s Töxik Death was formed in 2003 by “two metalheads starting a band,” exclaims guitarist and founding member Anders. “It was nothing more original than that. Morbid thrash was our thing, and we wanted to create something ourselves.”
Even with such enthusiasm, it took four years for the limited EP, ‘Happy Fukking Holocaust’ (Misantrof ANTIRecords), to appear.
“I don’t know really,” replies Anders when asked why it took so long to release their debut. “Lack of everything I guess! I wanted to do something, but the rest of the band wasn’t that interested. The lack of a decent drummer in the area didn’t make things easier either.”
Another five years would pass before ‘Demo 2012’ became a reality. “The same story started over again,” says Anders. “It didn’t turn out quite as good as hoped, and after the EP the vocalist and the bassist moved away so it was impossible to keep that line-up. Then in late 2011, I decided to start looking for new members. Bjarte was brought in as an additional guitarist and he was joined by new drummer, Robin, bassist, Robert, and Eirik on vocals. All the riffs for the demo were ready so we just started rehearsing and writing lyrics. From there it took only a few months before the demo was ready.”
‘Demo 2012’, released in May and already namechecked on Fenriz’ “Band of the Week” blog, features five scathing blasts of raw, violent speed and dirty, downright nasty thrash influenced by the likes of Discharge, Razor, Slayer and “Sabbat from Japan” says Eirik.
Would it be safe to say Norway is not really known for thrash on a large scale?
“It is a small scene,” admits Eirik. “But it’s really good! Just listen to the latest releases from Nekromantheon, Deathhammer and Condor. Inculter and Cockroach Agenda from Bergen are also bands with a lot of potential. Inculter are fucking 15-year-old kids!”
And how do you feel about the addition to Fenriz’ infamous blog?
“It’s cool,” says Eirik. “It sure helps in getting the word out! Fenriz has done a lot for the underground metal scene and larger record labels have started to pick up on it, which is definitely a good thing.”