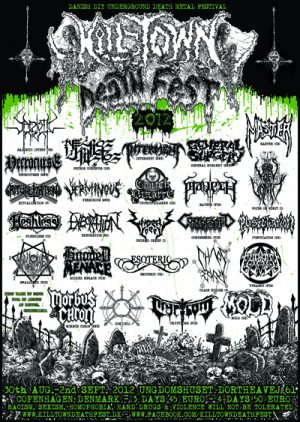 First band of the day are France’s Ritualization, crossing the tones of early Morbid Angel with Angel Corpse and an awesome sign of things to come over the next 3 days. Fleshless seem a little out of place, even admitting it themselves. Their modern take on brutal death metal with guttural vocals, the antithesis to the old school vibe of the other bands playing over the weekend, but they manage to get pits going with their slammy riffs. Next up are Finland’s Corpsessed, who’ve been making big waves in the underground since last year’s ‘Dagger And The Chalice’ release. Crossing the atmosphere of doom with elements of early Swedish DM, a dose of fellow Finn’s Demigod and some Incantation is enough to get any underground fan salivating. Live they are phenomenal, the tone they produce is amazing, and singer Niko energetically stalks the stage like a man possessed, splitting his head open on the mic in the passion of the performance. Definitely ones to watch. Interment are keeping the flag flying for the traditional Swedish death metal sound and why not, they’ve been going since it evolved back in ’88 when they were known as The Beyond. They’ve still not been given the recognition they deserve but hopefully live sets like this will remedy that. Master generate huge pits with the faithful crowd swarming around Paul Speckman’s mic like some worshipped god. The setlist showcases a few songs from latest album ‘The New Elite’ but mixes in plenty of older tracks for the fans.

Necrocurse take to the stage after midnight. Numbers start to dwindle from a days consumption of cheap beer but this doesn’t stop them from bringing the blackened vocals of Nifelheim’s Necrobutcher, backed by some serious old school sounding Swedish death metal mashed in with plenty of speed.

Day two opens with Denmark’s Pustulation. Old school raw as fuck death metal filled with catchy riffs. A debut album is due out soon, search it out if their live show is anything to go on.

Finland’s Maveth take things up a notch or ten, with their tight, very loud set. Their blackened death metal with rapid blast sections and a monster backline leaves jaws on the floor and everyone’s ears ringing for the rest of the day. Returning for Necros Christos, having witnessed them at Roadburn we know what to expect. Once again they do not disappoint, their occult mix of doom, black and mystical eastern sounds has heads banging all the way to the back of the room. If it was busy for Necros then by the time Sadistic Intent come on the venue is sardine territory. Despite the band playing for 24 years, a debut album is still yet to be released, the merch stall inevitably swarming with people after the opportunity to get the rare compilation CD made available. Live they play with the energy of kids half their age; the audience respond with the biggest pits of the day and divers fly overhead to these legends of the death metal underground.

We don’t envy Sweden’s Verminous coming on after Sadistic Intent, but they don’t seem to care. “This is our first gig in 8 years,” beams vocalist Germaniac. They walk on and batter everyone in sight with their brutal and relentless attack, waking the already knackered crowd into another frenzy. At gone 2am General Surgery walk on in their stage get up of hospital overalls caked in blood from head to toe. The band look like they are having as much fun as the inebriated hordes whipping up the pits down the front, their Carcass worshipping goregrind the perfect end to the day.

The final day, entitled Gloomy Sunday, slows things down to the detuned tones of doom, and it seems a fitting title; the last few days has claimed several souls. Bodies are stumbling about like zombies, clutching vinyl under their arms, nursing hangovers from the previous night’s metal disco, which had gone on till past sunrise. Following a rather sparse turn out for openers Chaos Echoes, Tyranny take to the stage all kitted out with keyboards, candles and monks robes. Opening with ‘The Leaden Stream’ from 2004’s ‘Bleak Vistae’, the band’s first gig outside their home country of Finland in eight years draws a large crowd. Tyranny’s sonic funeral decimation is that good it could be the highlight of the day, but then fellow Finn’s Swallowed come on. They destroy what was left of anyone’s eardrums and prove Autopsy are not the only DM band with a drummer/singer who can tear you a new hole. It seems it wasn’t just the audience’s hearing that was blown, Hooded Menace appear and god knows what the sound engineer is doing but it’s clear they are struggling. Such a shame from a band who usually slay live. However, they battle on, even treating us to a track off the soon to be released new album. The festival comes to a close with Esoteric, many of the travelling Europeans and American’s we’d spoken to were eager to witness the UK’s masters of psychedelic death doom . A crushing desolate set made up predominantly of material from last year’s ‘Paragon Of Dissonance’ submerses everyone for two solid hours bringing the festival to a crushing finale. Iron Fist went a Killtown virgin, but we can’t praise this festival enough. Something tells us our annual doom pilgrimage to Roadburn Festival just found itself a deathly brother.