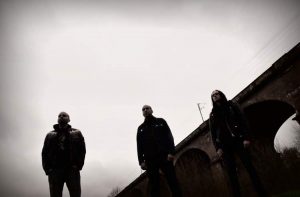 “Doomed to death, damned in hell.” Few have summed it all up quite as succinctly as Japanese burial advocates Coffins, but our own Indesinence have surely taken that tenet to heart on their latest album and Profound Lore debut, ‘Vessels Of Light And Decay’. The album is a desolate affair, downtuned towards the serpent’s lair, littered with pummelling riffs and sepulchral howls, and masterfully executed by homegrown talent. Are Indesinence England’s Great Doomed Hope? You’d be hard-pressed to convince us otherwise.

“Each of us are here to shine, for some length of time, as bright as we are able or as circumstances allow; then we must reach an end to make way for new beginnings, yet still struggle to secure some tiny shot at immortality through our work and deeds. And so do these songs. Much like our previous work, we view the album as an individual take on what are admittedly typically “doom”-centric themes: the passage of time, and the sometimes overwhelming inevitability of the certainties this entails. It could be broadly described as the rude awakening following [2006 debut] ‘Noctambulism’s hazier, dreamlike horrors, to face something more ‘real’ but no less intense,” muses their guitarist and vocalist, Ilia Rodriguez, who also spent plenty of time doing the Devil’s work in Binah, Pantheist and Esoteric. Joined by drummer Dani Ben-Haim (Adorior, Grave Miasma, Cruciamentum), Andy McIvor (Binah, Blutvial, Code) and guitarist John Wright, Ilia has crafted one of the most stunning debuts of 2012.

“We were lucky to work with two engineers that also happen to be old friends of the band, who understand our sound and ideas really well. Drums were tracked at Orgone with Jaime Gomez [Blutvial, Hexvessel] and everything else at The Priory with Greg Chandler [Esoteric], with a few overdubs done by ourselves at home and at John’s own Seraph Studios facility, and commissioned the mastering to James Plotkin. We asked Greg Chandler to lay down some vocals on the track ‘Vanished Is The Haze’; his screams pummelled our eardrums with metal and turned our testicles into baking flour, and we hope the same result will be achieved on the listener.”

‘Vessels Of Light And Decay’ recently saw an official release via Canadian powerhouse Profound Lore and comes packaged as a thick and beautifully-designed hardcover digibook complete with 28-page booklet. Label honcho Chris Bruni calls the album “one of the label’s proudest moments,” and Ilia returns the love.

“We do feel this is a perfect match and are immensely proud of the support shown by Chris so far. In an industry ruled by mediocrity and politics, Profound Lore embodies the triumph of quality, true enthusiasm, walking the talk, and a singular vision.”

Triumph of quality, triumph of death. Sounds like a perfect match made in Hell.