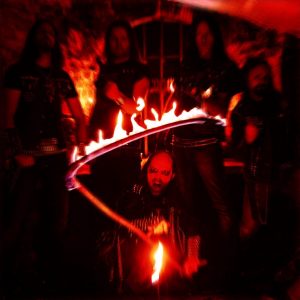 You may not know the name but you know the faces in Necrocurse. If you’ve paid any attention to what happened to the Swedish death metal scene post-‘Storm At The Light’s Bane’ there is a fair chance you have at least one album featuring the multi-talents of one Nicklas ‘Terror’ Rudolfsson. A man of many facets, while his first weapon of choice is the drums, he also plays guitar and bass and is handy with a microphone. And while his first big break came after joining Dissection wannabes Sacramentum, in time to record their classic debut ‘Far Away From The Sun’ at Dan Swanö’s Unisound studio in July ‘95, the second half of the ’90s saw him going into hyperdrive as between 1995 and 2000 he took part in no less than 12 full-lengths and various EPs under four different banners. But fast-forward a few years and his source of inspiration seemed to show traces of exhaustion. Nicklas had become focused on his main project Runemagick, a mostly studio outlet for him and his bass playing wife Emma. Ultimately, in 2008 after an impressive outcome of no less than 11 full-lengths, a laconic message on the band’s webpage simply stated that the band, although not defunct, was now officially “dormant” until further notice. Then came silence. Or so it seems, as Nicklas himself explains. “What happened exactly is that right after our last album [‘Dawn Of The End’ in 2007] our drummer Daniel Moilanen, who had started playing with other bands like Engel, moved to Stockholm, five hours drive from us. In the meantime, me and Emma moved to Uddevalla, 60 kilometres outside of Gothenburg, where we had our first kid so the band got put on the backburner. I think Dan is a fantastic drummer and I had a great relationship with him since he joined in 2000, to the point where I don’t see myself doing Runemagick without him anymore. But the band ain’t dead, it’s just on hiatus. As a matter of fact, I still have few unused riffs on tape somewhere and we’ve received few gig offers lately so who knows, especially since I know Dan is up for it.”

However this hiccup never actually stopped Nicklas from playing and composing music and unbeknownst even to him, he was already planning his next move. “Since the demise of Deathwitch and as Runemagick had moved away from its black and death roots into a more doomish direction during the later years I guess a part of me started to miss playing those kind of frantic and aggressive riffs. I got bored with Deathwitch and thought our last album ‘Violence Blasphemy Sodomy’ didn’t turn out that good, so I felt it was time for it to die and start something new. So around late 2004, I started gathering ideas for an unnamed project in that vein. I didn’t have a name or anything, it was just me sitting in my small home studio, putting ideas on tape and recording everything by myself. Soon enough, I completed a whole track by myself called ‘Songs Of A Thousand Funerals’, which can be found as an exclusive bonus on the tape version of our ‘Insane Curse Of Morbidity’ EP as a matter of fact, and that was the unofficial beginning of Necrocurse, although it took few extra years to really make it a reality.”

Indeed, for some time, this beast remained a solo thing, shared only with selected friends, until 2009 when Nicklas reconnected with high school friends of his; bass player Johan Bäckman and guitar player Stefan Rodin who were no strangers to his musical career. “We all grew up in Uddevalla and went to the same school. Actually, Johan and I were in the same class whereas Stefan was a year younger. At first, it was just me and Johan doing a thrash/death band called Eternal Pain but in 1989 we formed Masticator with Stefan and Robert Pehrsson on second guitar, who years later would do vocals for Deathwitch and is now in Death Breath. It was pretty primitive death metal and it lasted for about two years, long enough to put out a demo and do few local shows but nothing more. After that, we all followed our own path – for example Stefan, who lived in Stockholm for a while, played with John Norum from Europe! But we remained in touch and ironically we all moved back here around the same time for some reason so we started to see each other on a regular basis and soon the idea to jam together for old time’s sake came on the table. Next thing I knew, I was showing them those unused riffs and we took it from there.” 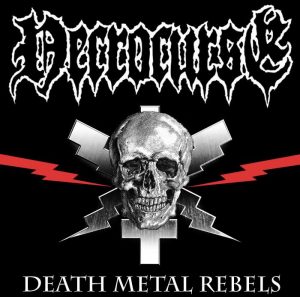 After they decided upon the moniker Necrocurse (“There are hundreds of ‘Necro’ bands around but what the fuck, it tells you right away what we’re all about, don’t you think?”), they decided to start working on songs in their home studio set up in their rehearsal room, with Nicklas on vocals (“We knew this was temporary as I didn’t want to end up doing drums and vocals at the same time”). Eventually, Hellbutcher from Nifelheim was brought in during the spring of 2010 through bass player Stefan, initially as just a session member so the band could complete their first five songs, four of which ended up on two different seven-inches released through Norway’s Aftermath Music, with whom Nicklas had worked previously with both The Funeral Orchestra and Runemagick. “Very quickly, we realised Hellbutcher was the perfect man for the job and we officially integrated him soon afterwards. His vocal style brings another dimension to the music than the standard growling.” This might seem like a surprising choice to some as the OTT attitude of Nifelheim has always been a love/hate thing, not mentioning the insane amount of studs the Bröderna twin brothers use on stage. “Well, we love ’80s heavy metal of course, but I guess that our stage antics are on a more medium level compared to them,” Nicklas adds with a chuckle. “Overall, we’re not as Satanic as Nifelheim but are more into horror and that kind of subject but we have few blasphemous lyrics still. And Hellbutcher did contribute with a few lyrics for the upcoming album so he obviously brought his vibe as well.”

Even if the latter remains vague about what’s going on in the Nifelheim camp (“I don’t want to talk about it but do not worry, we’re alive and well and we will have big announcements in the coming months!”), he says it came naturally, “as I live in the same area so we kept bumping into each other anyway!”

When we caught up with the band, they were locked up in Andy “King Diamond” LaRocque’s new studio Sonic Train Ranch working on the mix of their upcoming debut full-length, to be called ‘Grip Of The Dead’ and to be released early next year on Pulverised Records. When asked about how the material sounds compared to their first two seven-inches, while Hellbutcher thinks that it has more “1980s influences, even if it’s still quite brutal”, Nicklas simply states that it is, “Faster and better than our early stuff, simply because there is now a bunch of us composing instead of just me. I guess you can simply call it death metal but I don’t want it to be considered as another retro death metal band. Our guitarists might love the Boss Heavy Metal pedal but no-one needs another Entombed clone.”

When asked if he thinks Necrocurse will appeal to both Nifelheim and, say, Swordmaster or Deathwitch fans, you can tell that Nicklas ain’t the kind of musician who really plans anything. “What can we say, if you like real metal I’d find it hard to understand if you do not like Necrocurse,” he laughs. “It’s not that it’s a completely different style of music but we have not had a plan to do exactly the same thing as before either. It’ll be inevitable to find red threads since Hellbutcher sings and composes music in both Necrocurse and Nifelheim or with any of my past bands since I did compose a good chunk of the music. But to us, Necrocurse is no project, it’s a band on its own. And we’re just getting started, believe us!”