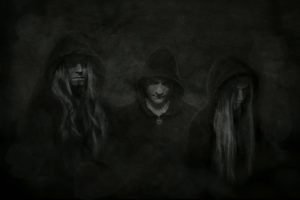 Don’t you dare tell RS that Lie In Ruins and Desolate Shrine, the two bands he’s part of, are alike; “That’s total bullshit. The only link between those two is I’m doing the vocals for both, but I don’t have any lyrical nor musical responsibilities in the latter.” Ask Desolate Shrine’s ‘real’ boss LL what he thinks then and he’d agree that that, “the only link those two are our singer and the fact that we all know each other, share a rehearsal place, drink some beers now and then and operate the within the vast genre that is death metal, but even that’s a bit different.”
Indeed, while Lie In Ruins’ 2009 ‘Swallowed The Void’ release was a classic yet solid throwback to the good old days of early ’90s Finnish death metal, Desolate Shrine’s 2011 debut ‘Tenebrous Towers’ and brand new ‘The Sanctum Of Human Madness’ album are different beasts altogether, two epic albums released only a year apart. Described by its creator as an album whose “lyrical, musical and graphic concept all revolves around the darkest corners of human mind – you can see it as a journey to the gates of hell if you will,” ‘Sanctum’ is about “our deepest fears, our most violent and darkest impulses, but also about strength and willpower.”
Solely a studio-based project – with RS and ex-Uncreation’s Dawn ML sharing vocal duties and LL taking care of everything else – LL sees Desolate Shrine as “our interpretation of what dark and atmospheric death metal should sound like. It’s our mission to try to perfect that. I think it’s quite obvious that we try to set ourselves apart from the purest US or Swedish death metal, even though both sub-genres are huge influences. There are so many bands that do the more basic old school death metal better than we would ever do so I can’t find any reasons to be restrained by any rules.”