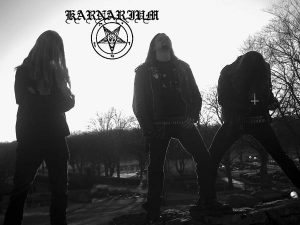 Many bands out there claim to be “fucked up and twisted” but Gothenburg’s Karnarium truly are. Almost as if they wanted to ruin the reputation of the world’s melodeath capital all by themselves, since their inception in 1998 this mob, who shelter various ex-members of Pagan Rites, Devil Lee Rot and Kill, have churned out some of the most noisy and bizarre death metal Sweden has ever given birth to, leaving a trail of drug-fuelled madness and experimentation behind them without never toning down the bestiality factor. Yet, somehow for their second proper full-length, ‘Otapamo Pralaja’, they seem to have straightened themselves up a little bit. Still, according to the collective voice of the band, nothing could be further from the truth: “I think we are a bit weird as people, no matter where we were based, but the aversion held towards melodeath surely worked as an incentive to make twisted music. Karnarium does not wish to be dualistic in that sense, even though we are mere humans. First and foremost, our initial plan was to make a sick twisted form of death metal with a sense of chaos that at the same time didn’t sound too much like the bands that influenced us. Imagine maybe the chaos of Sadistik Exekution and the rage of Malevolent Creation while at the same time not wanting to sound like these bands. There’s also fine line between having a chaotic feeling versus hearing what we are playing: too much clarity is interesting for the guitar nerd, but will make the overall manifestation sterile, whereas a murky sound enhances the ambiance but will compromise the sonic comprehension of the modus operandi. People who don’t know shit about recording or handling instruments rarely understand these dynamics and tend to confuse production with execution.”
‘Otapamo Pralaja’, which means both ‘I am melting’ in Basque and ‘dissolution’ in Sanskrit if that makes any sense, is out now on Nuclear Winter Records.