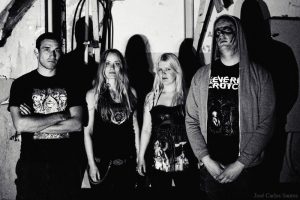 Angist are one of the most compelling bands to have catapulted into this writer’s ears in ages, and these chilly, jaded fingers don’t type that lightly. It’s all a matter of taste, to be sure, but man, have you heard this fucking band? If not, allow me to suggest that you put this magazine down, lovingly close its covers, and hop on over to your internet machine to look up the audio for their 2011 EP, ‘Circle of Suffering’. Drink that shit in, give it a good swish around in your mouth, then rumble back up to this article. We should be on the same page now. Their story is novel, to say the least – little band from Iceland makes good – but the quality of the music goes far beyond sheer gimmickry. Angist are a death metal band at heart, but like to mix things up with shades of black metal and thrash and moments of devilish melody. The vocals come howling out of the void, guttural, menacing, and pained; Edda Tegeder Óskarsdóttir is a force of nature. That sounds all well and good, but the icing on the cake is the way they manipulate the lightless, gloomy and overwhelmingly bleak atmosphere enveloping their songs. The result is stunning.
“We work really hard at our band even though we all have full time jobs. We have so much passion for our music and that’s really what matters to us and I think people can relate to that and the sincerity in our music,” says guitarist Gyða Hrund Þorvaldsdóttir earnestly. “We will never be fake or change for someone else. As a 50/50 female band we’ve gotten endless of ‘helpful suggestions’ of changing/softening our sound, singing clean, wearing less clothes etc. People are surely entitled to their opinions but we are an extreme death metal band and we wouldn’t change to become a more sellable product. It goes against everything we believe in with our music.”

Gyða goes on to tell us about the origins of the band, which is currently comprised of the dual guitar assault of she and Edda Tegeder Óskarsdóttir (who also supplies bloodcurdling vocals), Edda’s brother Haraldur Ingi Shoshan on bass and Tumi Snær on drums.
“Angist started out when Edda and I started jamming together late 2009. Few songs emerged and we liked working together so Edda‘s brother joined in as the bass-player and then we had another drummer. Our EP was released in October 2011 after being recorded that year and we also parted ways with our old drummer, went on a tour in France and played a lot of gigs and festivals in Iceland and even opened up for Heaven Shall Burn. We also recruited a new drummer, Tumi Snær, who made us complete. We are now a united whole and we’ve been able to improve so much with him onboard. In 2012 we concentrated a lot on playing shows and improving our stage performance, and we also signed a record deal with the US-based Abyss Records! We are so excited to start to record our album, our first full length.”

The roots for Angist burrow far deeper that 2009, though, as we discovered.
“I am a band promoter that picked up a guitar in my 20s when I decided that I’d much rather play music than watch other people do it. My first band was called Chthonic and played only two shows [both opening up for Burnt By The Sun], then for couple of years I was in a metal band called Hostile, but always wanted to do something more extreme. Edda has been playing guitar since she was 13 years old, when she locked herself in her bedroom with Metallica tab books and has been playing in many different projects like rock, punk, trip-hop/rock acoustic and other metal projects with her brother Halli,” Gyða explains. “In Iceland it was pretty difficult getting proper metal CDs growing up. You could buy CDs from the biggest bands like Slayer and Metallica but anything underground came from sample CD’s from magazines, mixtapes from friends and if anyone was going abroad they were sent with a list of CDs to buy! And then came the internet…

“But even though the situation has improved there’s only few independent record shops that sell underground stuff and ordering from abroad is very expensive since our currency is very weak and the customs are outrageously high. So, we still use the opportunity to buy CDs when we go abroad. It can sometimes suck big time to live on an island.”

An island renowned for its Viking rooms and creative industries, but still an island, and one that unlike the Emerald Isle and our own dear old Blighty, is stuck way the fuck out in the middle of the North Sea. Iceland’s held its own on the metal front, giving us Sólstafir and Svartidauði amongst others, and according to Gyða, isn’t that bad of a place to set up shop as a riff-slinger.
“We think Icelandic people are pretty acceptable to metal music. It’s not that they maybe all like it but they might give it a chance. A lot of things have changed in the last 10 to15 years over here. When we were teenagers we were calling the radio shows, asking them to play Metallica or Pantera but they said it was too hard for the radio but today you can hear this music on the radio on a Wednesday afternoon. So people are more exposed to it and with Icelandic bands getting recognition from bigger media it surely attracts new crowds of people. Even Edda’s grandmother gave the album a spin. My grandfather thought Edda was way too loud and didn’t see the need for all the screaming, but they are supportive and happy that we are making music,” she tells us. I can’t help but imagine the look on my granny’s face if I played her a few cuts off ‘Circle Of Suffering’, but old folk’s resistance to “that damn devil music” seems to hold true no matter which latitude it calls home.

“Iceland is a very artistic and creative nation. There are so many people making music, painting, making films, writing, knitting etc, so maybe that’s why people are so open minded about extreme music. Like with ourselves, we might look at extreme art and not like it but we recognise the amount of time and effort the artist put into this, just like other people with our music. But we also see so much beauty in this music, the leads, harmonizing, outlet of playing it and most importantly the sincerity of this kind of music. This music takes on the whole emotional scale, from anger, ugliness, anguish to being a salvation in tough times. Challenges are definitely that we are so far away from everything so it’s not as easy for us to tour like a band that is situated in Europe but we are up for the challenge! Also because the population in Iceland is only 320,000 you can imagine that not that many are avid metal concertgoers so you are most of the times playing for the same crowd. We love our Icelandic fans but it’s also refreshing to go abroad and meet new people.”

Thanks to a few of the intrepid folk behind Desertfest, they’ll soon have their chance to do just that. Angist are coming to London to play Seven Churches stage on April 27, and Gyða couldn’t be happier.
“Ever since we came home off the France tour we’ve been dying to play again outside Iceland. Even though the Icelandic crowd is great and we have so much support from our fans, it’s so refreshing meeting new people, seeing how the crowd responses to our music and challenging ourselves with new venues. We are fortunate enough to have met a great guy [we agree!], José Carlos Santos, when we were playing at a festival last summer. He quickly became a good friend to us and has been incredibly helpful and let the Desertfest guys know about us and the rest is history!”