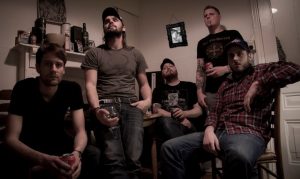 “We are attracted to hard and extreme music, with a fucked up atmosphere. Although most Herder members come from a different musical background whether that’s black metal, death metal or hardcore, we are all attracted to the darkness and what it has to offer,” bassist Blitzer told us of their sound. Given his tenure in alcoholic sound terrorists Urfaust, the man is clearly no stranger to strangeness and ill temper, and not even their homeland’s storied tolerance of heady ganja vibes can calm these misanthropes down. “Everyday life and the struggle to get along with the human garbage that walks these goddamn streets supplies us with enough hatred to write some fucked up, extreme shit. We might like the grass, but don’t mistake us for some fucking hippie reggae band that’s praising love!”
Well, we – and Herder – can’t be having that!