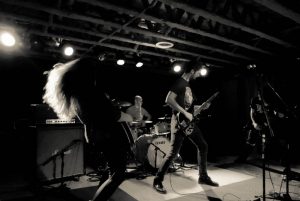 If their name was suggested by Paul “because of his love for WWII aircraft”, their silk-screened cover, made by Marie out of graphic elements stolen from an old book she bought in a second-hand shop, underlines perfectly their debut album’s lyrics, described as “weird Greek mythology mixed with some strange science-fiction or even heroic fantasy.” Depending on the reception it will get, their first two EPs might be reissued as well, but not before their next full-length, which the band have just started working on and hope to release before the end of this year.