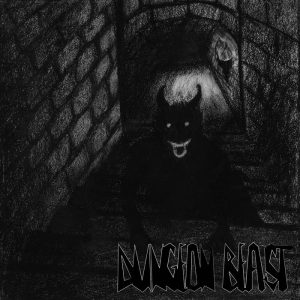 Inspired by classic heavy metal and thrash in equal measures, Dungeon Beast was conceived as a one-off project by Matt Preston, guitarist for the likes of Ghost Tower, Infectonator and Borrowed Time and the resulting sole offering, a sole demo entitled ‘Skeletal Assailants’ (that also featured Johan Skuldronus (ex-Funeral Dirge) and Dave Benson (Acephalix) was recorded in July 2005, shortly before Matt relocated from Olympia, Washington back to his home town in Pennsylvania and dissolving the band. Seven years later, Matt got the bug to bring Dungeon Beast back to life.
“In late 2012 I had a few song ideas that I wanted to record and I did so with the drumming and vocal talents of friends where I now live in Lansing, Michigan,” says Matt. “I had thought about naming this project something different since nobody from the first incarnation of Dungeon Beast was involved besides me, but since it was mostly just planned as a project demo with no certain continuation as a band after recording, it seemed fitting to use Dungeon Beast for the band title once again.”
Recruiting new members in the form of vocalist/bassist Matt Watrous (Harbinger) and drummer Reverend Ceckowski (Demon Bitch), Matt released a highly potent and impressive new demo in December 2012 available for free download via Bandcamp.
“I’d describe Dungeon Beast as old school heavy metal with both melodic and thrashy moments,” he continues. “Just as contributing performers differ from song-to-song, the style also doesn’t always remain consistent within a certain subgenre, but it is all planted in old school heavy metal. Influence and guitar tone-wise, DB isn’t too far off from my other bands but what makes it different are the sounds and ‘vibes’ that the musicians that I collaborate with bring to the table.”