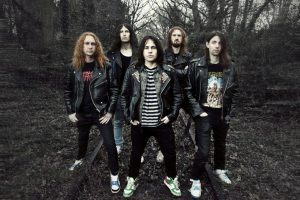 Toledo Steel are a tasty new addition to the slowly rising gang of young, old school UK metal troupes. “I’m a fan of swashbuckling films, the age of swords and gunpowder and I used to fence, so whilst trying to think of a band name that packs a punch I remembered Toledo Steel, as swords made from it were strong and hard to break,” drummer Matt Dobson tells us. “Stainless Steel didn’t quite cut it!”
The four piece formed in late 2011, in Southampton, after shared friends warned of mutual plans to form a band influenced by NWOBHM and ’80s metal, saying; “We wanted to create a sound that more or less keeps the flame burning for the people we look up to.” A solid demo won them some supports slots for the likes of Iron Knights, High Spirits and Cauldron around the UK. Matt offers that; “playing to a crowd that are really into old school metal and really like what you’re playing means you must be doing something right.” The Steel are indeed an effective live unit with tasty playing and a natural energy that is both genuine and fun. So what’s next for these keen newbies? “We have found ourselves playing with some great UK acts and lots of the original ’80s NWOBHM bands are reforming, which shows that the scene is definitely alive and well. An aim of ours is to play some of the European Festivals like Keep It True and we are currently in the studio recording an EP, which will be released soon too.”
Into Battle indeed. Keep the blade sharp lads!