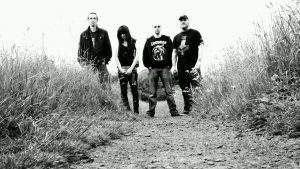 Something wicked this way comes, billowing down from the decaying North on winds of plague…or of genocide, as the case may be. Visions of nuclear fallout and apocalyptic raids summon wrenching flashbacks for some, and provide lyrical fodder for others; Durham’s Winds Of Genocide have always fallen into the latter camp, but now, with death/doom project Uncoffined, two of its members have ventured further afield, beyond the outskirts of Chernobyl and down along the cemetery road.
“The band formed officially in early 2011 after myself and Glynn [Alkohall, guitars] started jamming on doom riffs during breaks at Winds Of Genocide rehearsals, where I would jump behind the drumkit and we would start jamming on Vitus riffs,” Kat Shevil explains. “I personally have always loved the dark, evil, morbid vibe of a lot of the bands who blend such a mix of traditional doom and ancient death metal together, it has a certain atmosphere in it that other styles do not possess, plus the crushing heaviness of such music has always attracted me to it. We are definitely much more inspired by the old school doom metal stuff, old Black Sabbath etc, but there is some ancient death metal, death/doom, Hellhammer, old Celtic Frost influences present in our music that will be noticeable throughout the debut studio recording. Overall, we tend to think of our music as lying somewhere between doom/death and traditional doom – doom metal of death, if you will.”
Fully arisen and thirsty for blood, Uncoffined have already desecrated a few stages, with more live assaults in the pipeline and a debut album in the can.
“Our debut full-length album ‘Ritual Death And Funeral Rites’ will be released later in the year on CD via Memento Mori and Underground Movement (on cassette tape) – expect the release around late summer. DARKNESS, DEATH, DOOM ETERNAL.”