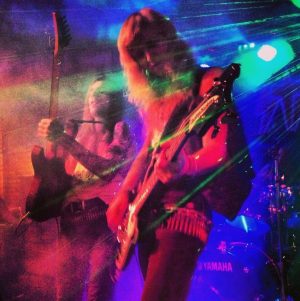 Far from embarrassed by their initial input (and no reason to be, Stryker was excellent) their first full-length ‘The Fullmoon Sessions’ is an amalgamation of their recorded output with the previous band, along with some new tracks. Not that any new fan could tell, the recordings were stretched across a three-year period, but regardless, the album is crystalline and energetic, featuring five galloping originals alongside a merged opening song that segues into an excellent cover of Ms. Stevie Nicks ‘Sisters Of The Moon’. Pressed to vinyl by emerging Brampton, Ontario label Hard And Heavy Records, it sees the band put their own twist on the Canadian new wave of traditional metal wave that’s been sweeping across the continent, popularised by bands like Midnight Malice, Axxion, Skull Fist, Gatekrashör, Cauldron, Manic Strike, Call Of The Wild, Manacle, Illegal Bodies, Possessed Steel….. you get the picture.

“I do consider ‘Full Moon Sessions’ as a trajectory of us as a band,” muses bassist and lead vocalist Cam Mesmer. “We were going through record stores and going through bins of records, and finding stuff that interested us. When we started out we were really into ‘80s heavy metal, you know, Judas Priest, Scorpions, Motörhead, etc. As we’ve been discovering new music and getting interested in new genres, we’ve kind of been working our way back from the ‘80s to the ‘70s; Genesis, King Crimson, and then the ‘60s with Janis Joplin, and just taking on new influences, that’s what our sound reflects.”

He continues; “Some of the songs were written seven years ago when we started, and some of them were written very recently, right before it was recorded. It kind of shows where we came from, where we are going, the influences we started with, and where we are now. You can view it as an arrow, pointing in the direction that we are going as a band. That reflects on what our next album will sound like.”

Big plans are brewing in the cauldron, as the young trio are ready to embark on their first Canada wide tour and record again in the near future.

“We are very excited about our cross Canada tour, this is our first major tour. After that we are very hopefully about going over to Europe, and playing some shows over there. We are going to be looking into touring the States as well,” explains Mesmer. He adds thoughtfully; “When we decided to change our name at that moment, one of the reasons we changed it was because we realised it was time to make it or break it. We decided if we were going to go 100 per cent with this, and really do our best to do, we were going to go right then, and go off on this journey.”

Accompanied by the squealing leads and riffs of guitarist and vocalist Graham McGee, the weird and warbling yarl of Mesmer’s vocals that are comparable to the oddness emulated by Manilla Road or Pagan Altar, and the rollicking drums of Lester Skelter, you can rest assured they’ll get far. All in all, this is a nifty package that will clearly age with grace as the band itself has. Truly, this is “hypnotizing heavy metal.”