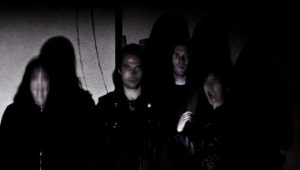 There’s a reason that black metal alchemists Sodb are one of the most buzzed-about bands in Ireland. Drawing upon their considerable combined experience (we’re talking members of Altar Of Plagues, Putrefaction, Abaddon Incarnate, Dordaid Dam, Okus, Fuck You Written In Shit…) the three men and one woman of Sodb have created some truly special music on their first release, ‘Don Seantalamh A Chuid Féin’. The atmosphere is chilling, the talent and songcraft undeniable, and songs themselves as hypnotic and emotive as anyone could wish. It’s a startlingly mature release, and doesn’t sound much like a traditional shoddy demo recording. There’s a depth to the songs that only a certain level of care and consideration can create, and it’s a fair assumption that the band’s own deeply-rooted aesthetic is the cause of it. If that name hasn’t tipped you off yet, Sodb is an Irish band in every sense of the word; half of its members even hold university degrees in Irish culture, and all save for bassist Irene Siragusa are Irish born and bred. Vocalist O’Loingsigh, whose own musical background is split between black metal and traditional Irish folk music, is happy to shed a bit of light on the darkness within.

“The original idea was to create a band with a subject matter and imagery overtly based on the ideas and concepts found in Irish mythology and modern folklore, without making it overly cheesy, which is always the risk with these things. My academic background is in Early Irish language and Irish folklore, and it can be quite despairing to see the ways in which this material is mined in popular culture. I felt the need to explore it with a deeper understanding of the underlying motifs and symbolism rather than just replicate the comic book style approach, which I think is all too common in the metal scene. Although the songs are all based on ancient motifs and beliefs, they are all relevant to life in the 21st Century. The demo’s title, ‘Don Seantalamh A Chuid Féin’ (‘To the old earth it’s due’), comes from a line in an Alan Moore story, which concerns a Neolithic boy who fears that ‘old dirt’ wants to take its due, because his mother wasn’t completely buried. Her foot was left sticking up, unburied, and he believes that the earth wants to take his foot instead. This is an idea that is replicated in a story from Irish folklore whereby a river will drown a certain person every year, and if this person manages to escape drowning it will find another way to drown them or drown someone else in their place.
“I was really drawn towards this idea that the earth and the sea had to be appeased at certain times by consuming human life and in the lyrics to the title track this idea is combined with imagery that turns up with regard to negative manifestations of the Sovereignty Goddess, which the appellation Sodb relates to. The song ‘Don Seantalamh…’ itself is framed as an invocation to the goddess encouraging her to come amongst us and take her fill.”

Loingsigh’s views on traditional Irish music draw obvious parallels to his other passion, metal and crust punk. “To the uninitiated, it might all sound the same, but what is going on under the surface is phenomenal with regards to the complexity, approach and deep-rooted knowledge of the music that these musicians had. There are so many layers of different patterns going on in the melody of the tunes; it’s really quite mind-boggling at times. This approach to piping and my study of it has definitely influenced the way that I look at guitar playing and the creation of layers of sound, except that obviously it is easier for us with three musicians in the band.”

Much has been made of a band that was, for all intents and purposes, originally meant to be knock-around side-project between friends. Fans of this kind of intense, entrancing black metal had better be counting their lucky stars right now that Sodb made the leap from jam room to living, breathing, gigging entity. “Originally I thought we would just record something and leave it at that,” O’Loingsigh recalls. “I had all these bits of songs stuck in my head over the years and I just felt the need to externalise them, get a recording down, and I didn’t really plan on anything past that. Very early on however, it became obvious that it would be much more than just a one-off studio project, so we just kept on going. We had bits and pieces from before in previous bands like Slóg and Dordaid Dam, and that really provided the base for our repertoire. As we played them and worked on them though they just became larger more and more complex; the only hard thing to do was to know where to stop and move on!

“I had been wanting about playing in a metal band since I was a teenager and I realised that I had gotten together some really great musicians who are all on the same page with regards to what I want to be doing. We all work really well together musically and it wouldn’t make any sense to stop the band when this remains to be the case.”

The demo was initially released on cassette by Dublin’s Into The Void Records, and after those first two (!) pressings sold out, the label decided to give it the vinyl treatment. One would imagine that a proper full-length is on its way, but according to O’Loingsigh, Sodb like to take their time with these things. “It takes us a very long time until we’re happy with any particular song and we usually tinker away at it for months and months until we’re all finally satisfied, but that’s grand – no one’s in any mad rush. A full-length is definitely on the cards though,” he promises.

In the meantime, a canny listener would do well to heed O’Loingsigh’s advice, and delve further into Ireland’s musical legacy – metallic or otherwise. “90 per cent of the music I listen to at the moment could be categorised under the bracket of Traditional Irish. It is only by repeated close listening to the uilleann piping of some of the older masters such as Willie Clancy, Séamus Ennis, or Tommy Reck, that one becomes aware of the extent of their virtuosity. I could list off loads of people I’m into at the moment, most of them older traditional singers that I’ve been hanging around with recently, but I would imagine it would be lost on the majority of your readership, so instead I’ll encourage anyone reading this to check out the likes of Slidhr, Myrkr, Rebirth of Nefast and Haud Mundus’ top quality stuff!”