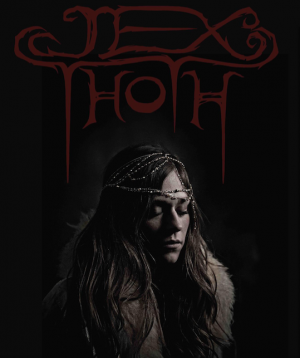 There have not been so many wicked women bewitching the heavy rock world as there is now. Jinx herself must be so proud. But the high priestess of them all is most certainly the majestic JEX THOTH. With a new EP and album out this summer, KIM KELLY comes listen to her sermon

Jex Thoth is a busy woman. Fawned over and fetishised as one of occult rock’s true High Priestesses and a devilishly talented musician in her own right, she is a quiet enigma floating airily through a thicket of over-sharers. There isn’t a ton of information about her out there, and this wilful silence has led many to style her as a mystical entity, or at the very least, one that likes to keep people guessing. That’s how she likes it, too, telling Iron Fist, “Jex Thoth is the most personal to me of all my projects and too much tampering with how I relate to my own experience will most certainly have an effect on the music over time.” Right now, her ambient ‘Circle’ EP’s still cooling gently on the windowsill while Jex preps for the release of her next full-length, ‘Blood Moon Rise’ (on I Hate Records). We caught up with her somewhere along the highway whilst in the thick of a European tour, and she graciously submitted to our badgering sometime between sound check and blissful repose. The new album itself is a triumph, by the way. ‘Blood Moon Rise’ is absolutely gorgeous in construct, and sounds as though its erstwhile creator has embraced a slightly more pop-influenced sound. When compared to her earlier albums and the Totem songs that first brought her into our earthly consciousness, the production is more open, the songs less fuzzed-out, and her voice – oh, that voice – is crystal-clear, drawing inevitable parallels with her work with Sabbath Assembly. Like any good avowed nature goddess/hippie, though, she swears any changes made were of a completely organic origin.

“I did not make a conscious decision to alter the music,” she says. “If you allow it, that will just happen over time. The way I hear music is constantly changing. I listen to songs I love over and over and listen for things that will allow me to appreciate them in a new ways. It helps me to understand why it is I think something’s good. Music is meant to make us feel things. There are so many factors that go into creating a sound and a vibe. My understanding of music is constantly evolving so naturally, each of my records reflect that.”

Speaking of Sabbath Assembly, Jex may no longer be affiliated with the project, but the ritualistic, psyched-out vibes from ‘Restored to One’ seem to shine through ‘Blood Moon Rise,’ to great effect. She agrees, sharing a few musings upon her experiences with the cult.

“Sabbath Assembly began as a project, which developed into an album, which became a band that did a tour so that we could share this music we felt very much a part of. What you hear on that record is our attempt to re-interpret the Process Church hymns in a way that reflected the special qualities we felt they possessed. We wanted to capture a vintage sound that they might have had, had they been recorded at that time. In addition to that, the album reflects my own style and taste, and it’s very important to mention that they were both produced by the masterful Randall Dunn. I was so excited to get to work with him on ‘Restored To One’. It was an amazing experience and the moment we were done I knew I wanted to make the next Jex Thoth record with Randall. I immerse myself fully in whatever experience I’m having, that’s how I’m wired. It was intense seeing how the music affected other people. That experience was one of many over the last five years that has contributed to why I’m made the choices I did on ‘Blood Moon Rise’.”

That’s good enough for us, given the strength of the new material. We tried to pry further into her creative process, and were thoroughly stonewalled. The lady’s not for giving out secrets, after all, but she does let us have a few hints.

“Honestly, I like to let the records speak for themselves. The tones, the arrangements, the lyrics, and my inflection tell the story. A lot of thought went into the track order. The earlier songs help you comprehend the later songs. As a whole, ‘Blood Moon Rise’ is about transformation and adaption. Individually, each song is an exploration of how and why.”

As esoteric as her songs may sometimes feel, there’s very little left to the imagination as far as her live performances are concerned. Image and aesthetic are terribly important, and the conveyance of a wild, Pagan feeling from Jex to her audience is paramount. Her blood-red robes, burning sage, and candlelit rituals are captivating, to say the least, and lend an immersive quality to an already impressive musical repertoire. According to Jex herself, it’s not just part of her performance – it’s part of her, and part of her understanding of both the world we live in and the one that dwells below.

“Careful mentioning that underworld, that’s a privilege which demands great responsibility. Suffice to say, it’s here all around us,” she cautions. “Each live performance is a personal ritual for me. Lighting the candles and the burning the wood are things I do in my daily life, they help me find a comfort inside myself so that I may be open to share. Live, I try to deliver my most honest and deepest understanding of my songs. To do that, I need to be in a state of mind to recognise what it is I’m feeling in that moment.”

To see is to believe, and to listen is to understand. There’s a blood moon rising – take care to watch your back.