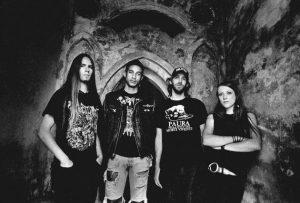 Scolex trawl the dankest, dirtiest sewers of classic knuckle-dragging, doomhauling death metal and slap a nice coating of grime and crust overtop the snarling guitars, mangled d-beats and cavernous roars. In keeping with their DIY roots, the whole thing was self-released, though Osterhout’s not opposed to forming the right alliance. “As cool as it was to experience the record pressing process myself, it’d be even cooler to see who has interest in us. I’d definitely consider getting picked up by a label for our next recording,” we’re told. All in all, ‘Torn From Beyond’ is a sickening display of morbid talent and, as Osterhout says, more is on the way. “We just finished up recording for a split. We’re also writing more for another record that we hope to get out by early 2014. It’ll be crushing!” she promises.