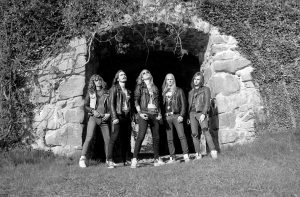 A few years ago on an email to a certain Mr Gylve Nagell I was warned to check out a new thrash band from Sweden called Antichrist. I never heard of this band and there was nothing about them anywhere online. I was ordering the Bastard Priest demo from Blood Harvest at the time and noticed they had Antichrist’s ‘Crushing Metal Tape’ demo so I added it to my order. Fuck it, a recommendation of anything with a hand-drawn cover should never be ignored. It arrived and although the spools almost wore out of the Bastard Priest’s ‘Merciless Insane Death’ demo, Antichrist’s effort didn’t quite click with me. Yet…

Fast-forward to 2010 and I noticed they released another demo, ‘Put To Death’, and as unsure I was with the first demo, I ordered it. Unfortunately I didn’t get the version soaked in goat’s blood (fortunately?), but this demo sure kicked up a stink in my house. Fuck, I must’ve played that tape a hundred times. The title track made me want to go out and tear the flesh off poser’s faces and send it back to their mother’s but I felt it better to try to interview these young Swedes about this incredible sound they’d achieved over two essentially three-track demos (yes, the debut got me in the end). However, a band who shunned the light weren’t too easy to get a hold of.

I had had some success in contacting them over email but it was pretty fractious and replies would come multiple months after mine. I think I actually sent them two sets of questions before, in 2011, I threw down the gauntlet. They told me to come see their album launch in Gothenburg – with support from none other than Kolbotn Thrasher Union’s finest Nekromantheon and DJ Fenriz – and we could do the interview then. I had heard tales aplenty from returning warriors from Muskelrock about their blistering live shows so I booked myself a 20-hour trip to Sweden and the rest is, well, history.

So recently, when Louise got in touch recently about me interviewing these thrash pilgrims with a two-week turnaround I laughed out loud. Knowing there was no way on Earth that would ever happen, I got to thinking about how I could get one quicker when I remembered my buddy Bradley Smith over at Nocturnal Cult telling me a few months back that he was planning to interview them. I told him he would probably have to take a flight from his base in Hawaii to Scandinavia in order to achieve that and wished him good luck on his travels. I heard nothing more about it again. When I asked him if he had ever gotten it returned as Iron Fist were after his reply was not positive. However, he mailed Electric Assault Records head honcho Henry Yuan and within 24 hours they turned it round, and here, for your reading pleasures, it is…

You guys have a new 7″ out called ‘Burned Beyond Recognition’ – your first release since the debut LP, ‘Forbidden World’… what can you tell us about it and why did you choose to cover ‘Kill With Napalm’ by Evil Blood on the flip?
“Yes indeed we have. It was recently released by Electric Assault Records and is almost sold out already, but if you missed it you will get a chance to hear the new song live [at one of our upcoming shows], at least. ‘Burned Beyond Recognition’ is a lot more aggressive and violent than anything we have ever done before. ‘Kill With Napalm’ is a great tune by a great band that no one seems to acknowledge. We had only one song done and wanted to release a single, so we thought of some different ones [for the b-side] and decided against putting on a classic thrash metal song in favour of something more obscure.”

‘Forbidden World’ set the underground on fire upon its release in 2011, were you pleased with the reviews? What were your goals with this album and how do you think it set Antichrist apart from other thrash bands in the underground?
“We had almost no bad response on the album, at least none that got to us. We never could’ve imagined that it would be that appreciated. Although we realised that we were doing something different, we did not know how it would be received.
“We didn’t have any goals set for the album, except that it had to outdo both demos in a superior way. We’re always keen on including both atmosphere as well as hard riffing, many bands seems too content with copying the same cheap riffs.”

What makes a good thrash studio sound? Is it hard for you to capture what’s in your own mind as to how you want the album to sound? What old album’s sound would you like to resurrect?
“We are really not the right band to answer that question since we think that [Possessed’s] ‘Beyond The Gates’ has the ultimate good thrash studio sound. When we played that record to our studio guy he asked why they had put an ‘Eddie Meduza reverb’ over the whole album. It’s extremely hard to capture the sound you want because you have all these ideas in your mind but you can’t really talk the fancy studio-talk. We always use words like ‘attack’, ‘chainsaw’, ‘hard’, ‘fucked up’ and so on, when in the studio.
“We don’t really want to model our sound after a specific album, we want it to sound special, weird, and extreme. Of course you pick up some ideas when listening to records, but not only metal records. A lot of bands today do that right, but there are even more doing it wrong.”

Antichrist performed at the second Live Evil Festival after being named Band Of The Week on Fenriz’ prestigious blog. How was is to play Live Evil and also to get the support of respected musicians like Fenriz?
“It was a great gig for us, and the audience (it seemed) really liked it. We are looking forward for this year’s Live Evil festival in October; it will slay. And of course it’s nice that ancient rockers like Fenriz enjoy it. It would be kind of disappointing if the Pope was into us. Our live shows are pretty intense, we think. Probably like a good beating with a chainsaw in the face and a machete up the ass.”

Thrash has such a primal feeling to it and its violence, speed, and aggression are unmatched. Why did you choose to start a thrash band and what bands do you think best exemplify the word thrash?
“As you mentioned above, it really is the most aggressive music and that’s why we choose to play it. Everyone played death metal back when we started out and nothing really exciting was going on. Nobody played in standard E. Slayer, Metallica, Destruction, Kreator, Possessed, Exodus, Sodom to us are THRASH!”

An Abba museum recently opened in Sweden. How do you think Abba reflects on Sweden as a country and what do you think are the most important bands to have come out of Sweden?
“I don’t think anyone in the band would pay money to go to that museum. We think that Gyllene Tider is a better band than Abba, really. The most important bands form Sweden, for us, would be Bathory, Candlemass, Dissection, among a few others.”

So what are your upcoming plans with Antichrist? When can we expect a new album? Any new shows that are worth mentioning?
“We are going to punish the East coast of the United States of America this month. After that we’re heading to London and the Live Evil Festival. The album will hopefully be recorded early next year.”

Skin is turning black and blood is pouring from the face.
Flesh is peeling of the corpse, they slowly burn to death.
Buried in inferno in the most unpleasant ways… They die!!!