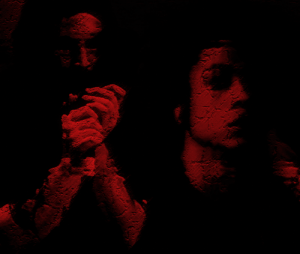 How do you come up with such a strange and disturbed entity like Ævangelist?
Matron Thorns: “With no particular agenda in mind, I’d say. We don’t approach music with any specific genre in mind. As the title of this album implies, it’s meant to be an experience happening to you as opposed to something you are only listening to. We wanted to take the idea of evil in music out of the realm of just hypothetical.”

It is almost as if your music was strongly seeking to install an almost masochist relationship with the listener. To many, it’ll sound much too chaotic and suffocating, yet those who’ll dare look into it will most probably end up being drawn to it, as if they were looking to be swallowed by the void it created…
“When you’re saying that, I can’t help but recall the ’90s when it seemed it was a lot easier to have bands singing about zombies, church burnings and that type of thing because the times were a bit more innocent and those kind of topics were considered very dark and risqué. But now, it’s enough, maybe because times are a lot worse. So, I think that a portion of our appeal comes from the fact they know there’s some part of this that is not based in fiction. Our music is not based in things we want to be real, it is based on things that to us are real and we have the level of conviction for this music that is required to extract these types of emotions.
“As you said, it is not easy music and one has to almost earn the experience and is definitively not meant for casual listening. There are in there things that are abstract and that you can’t place in your mind yet that have an effect on you. And they stay with you, they linger. And when you start dwelling on those things, you can manifest some things that are perhaps surprising and unexpected.
“Then again, when you reach into the void, you never know what you’re going to pull out. Actually, I would go as far as saying that part of one’s self has to be sacrificed in order for something sometimes like this to exist.”

So you’re asking the listeners to submit themselves to music?
“Yes. At the end of the day, people will try to find a way to humanize what they’re looking for. Yet, I didn’t wanted to give the listeners anything to hold on to and to comfort them so they could say to themselves ‘well, this is all just make believe’. Yes, it is challenging music but it’s because it is meant for the listeners to take themselves out of reality in order to put themselves into a new whole new reality. Our goal is to affect them on more than just an audio level even if they won’t be able to realise it right away. But if you listen to it repeatedly, it will draw you in.”

Is being a two-man unit – with your singer Ascaris doing the vocals on one side and you taking care of the rest – more appropriate rather than an actual band that rehearse and do gigs?
“We have a very efficient way of doing things. Ascaris is somebody that shares the specific vision that is Ævangelist. He’s somebody who not only knows what he’s supposed to do but also why he’s supposed to do it. So there isn’t a lot of questioning going on… He knows. When you create something that comes from your heart, your soul or however you want to romanticise it, this comes from within and manifests itself, literally, from an alternate universe, as it has never existed in its form on this planet prior. And you’re the one bringing it out and making it real. And with such a very specific vision in mind, it is very hard to come across individuals who would humble themselves to be part of what we’re doing without feeling the need to add a foreign element to it. This being said, we’ve been working on making our first gigs next winter, including a festival set up by a friend of mine called the ‘Infernal Fest’ in Colorado. If everything goes according to plans, we’re not expecting anybody to swing their hair or elbow the guy next to him saying ‘hey, this is a good one!’. What I foresee is people in the audience being mostly puzzled, not fully understanding what is going on. Our aim is to bring something very unusual, something that takes the listeners outside of the based reality they share with everybody around them. Without giving away too much, we hope this is going to be something that you haven’t seen yet.”

Although you’ve used colourful and detailed artwork, Ævangelist still comes across as a very cold entity. Is that accurate?
“That’s not entirely true. See, back when I was just a fan, I would go to a record store and thumb all the records until I would fall on a cover that would catch my eye. Around that time, I was already looking for something very abstract and dark, basically the most evil music I could find. Being younger, I went for those that had Satanic symbols, zombies and other things but I was always turned down by the end result. It always turned out to be just music: emotionally, I couldn’t connect to it like I wish I could have because there were no real emotions to be found. I have a quite recent example for you: to my own surprise, I appreciated the recent ‘Evil Dead’ sequel because of the whole sentimentality that was incorporated throughout the movie, that’s what made it really scary to me because it creates this empathy that you didn’t know you had for those characters and the hopelessness of their situation. The bottom line is that to me, the true component of horror is despair. You know, not just that feeling that you’re going to die but that actually, you’re going to die and go to hell too. That not only this life is going to end but that you’ve got this eternity of suffering ahead of you… Those are some of the feelings we pursue with Ævangelist.”

The weirdness of Ævangelist seems to come from the fact that, especially on the new album, it is as if there were two different bands fighting against each other yet sharing the same audio space: in one ear, a dark ambient, formless and noisy entity and in the other, a more classic we should say black/death outfit. As if your music was in a constant state of conflict…
“That’s a quite accurate way to put it. Even if distinctly, said parts may come across as being familiar, some coming across as ‘metal’ if you will and others as ‘ambient’, they overall had been written in a way that even if taken on their own, every singular element would hold up as well. The songs are meant to convey a constant flux, a constant state of transition like falling off the face of the earth through manifolds of clouds and stars with things gradually darkening and becoming dismal. Still, it is hard for me to discuss Ævangelist in musical terms because even our approach in arranging things is different from how a conventional composition is supposed to be.”

Prior to the album, you’ve released a split with Esoterica, featuring a 22 minute epic called ‘Omniquity’. Was this particular track left out because it didn’t fit the concept of ‘Omen Ex Simulaca’?
“As a matter of fact, it will be included in the LP version of the album. ‘Omniquity’ is like the epilogue of the story told throughout the disc. It represents the specific belief system of the band; the achievement of nirvana. It is available separately because it is meant to show a glimpse into the end of the journey. Or I’d rather say the ultimate passing-through point. The title itself is a made up word of ‘omen’, ‘iniquity’ and ‘antiquity’. And it represents a phase in the assimilation of what is called the abysscape, the consciousness that resides beyond all known existence from which the last song of the album lifted its title from. After one has assimilated into it, they can achieve omniquity.”

So that extra makes the LP version the album’s ultimate version then?
“Exactly. Since it includes another extra track, overall it’ll be an almost 100 minute long trip. But only one who listens from the back to the end of the LP version will be able to be completely immersed into the entire phase of becoming part of this emptiness.”