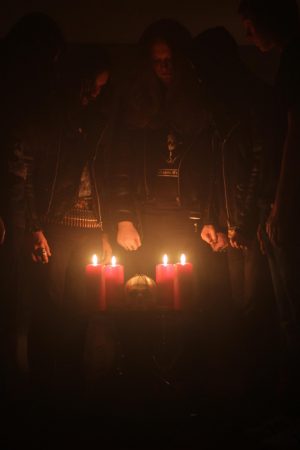 Having just released their debut EP, ‘Baneful Magic Death Worship And Necromancy Rites Archaic’ on underground label Ulthar, the band take their occult concept seriously and there is real thought and praxis behind the project; “The name Crypt Lurker was intended as being a subtle reference to the process of seeking liminal spaces, places like the crossroads, a sea cave or a crypt, which mark the threshold between realms; similar to the significance of sitting upon a burial mound and so on. Such influences and ideas have been present throughout the longevity of the band, since formation.”

It’s an approach that adds authenticity to the release and a palpably ethereal dimension. The band intend to create a ritualistic atmosphere at their gigs, by burning Qliphotic incense and combined with the hypnotic nature of the music, it’s likely to create a very different experience for the audience.

While occult doom has become a real cliché over the last few years, Crypt Lurker are as far away from the mould as can be. Desperately heavy metal with an authentic, obscure aura, the band is one to watch and one to definitely check out live this November.