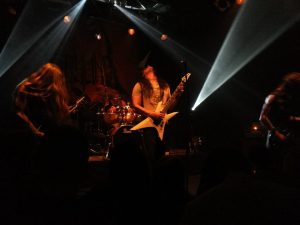 Though, for all the esotericism, it seems there are greater and more determined forces at work: “Moreover, the reason Beyond was created was to determine an icon to start ending the ever-growing lack of quality in modern black/death metal era. If you ignore 99 per cent of all releases that surround you and still adore this form of music, you simply have to forge your own.”

‘R’s misanthropic tendencies, however, seem set to keep Beyond lurking deep within his shadowy confines. Expect nothing in the immediate future. “There is no current lineup for Beyond. A new lineup is in the works. I estimate there will be no live appearance before we’re into 2014. Anything else has been cancelled for now. Whenever this will work out, there’ll also be a second album.”