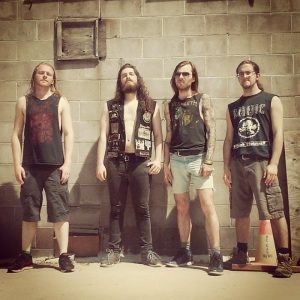 Historically, doom has always been this unpretentious; it’d be dismissible if it weren’t so damn earnest and intentionally tongue-in-cheek. Band members celebrate their forefathers and mothers without hesitation, revelling in the mournful cries of their elders and contemporaries, and join forces to spread the despondent credo. In that sense, Vancouver doom act Funeral Circle is a typical doom band.
Let the checklist commence: their name was borrowed from track three of the 2004 demo of Australian quartet The Wizar’d. They’ve covered the fist-pump-inducing classics, both obscure and well known – a song by Montreal’s Lord Ryür (‘Pact With A Sinner’) and Witchfinder General (‘Burning A Sinner’). They’re frequently name-dropped by premier German export Atlantean Kodex due to a longstanding friendship, and released a split in 2011 with ex-Bizarre project Lord Vicar. After their vocalist departed in early 2013, Adrian Miles (former crooner for English epic doomsters Solstice) joined. Of course, the members are super-fans of the genre. At the Noctis 666: Lucifer Rex festival, I watched while Funeral Circle guitarist, songwriter and bandleader Matthew Barzegar stood front row centre, fist in the air, clearly on the verge of heart implosion while the legendary Pagan Altar mesmerised the screaming audience. Two days later, when we convene at a café in downtown Calgary to discuss Funeral Circle’s lauded full-length debut, a haunting slab of epic doom metal, most of the conversation revolves around our mutual obsession. Such is life, such is doom. In the depths of darkness, evil flowers bloom…

“I named the band when I was 16, so I was barely in high school,” begins Barzegar, a youngling who has already earned his stripes. He is juggling a beer in one hand, and a massive, dripping sandwich in the other. He is surprisingly chipper, given the previous evening’s festivities. They lasted beyond sunrise, and ended with a fire alarm at the hotel where most Noctis attendees were sleeping. Barzegar and two pals ended up in the stairwell with members of Candlemass and Girlschool, elated at the opportunity to briefly flee alongside their musical heroes.
“I talked to The Wizar’d, they said it’s cool, you can keep [the name]. It’s a vague reference to a pretty cool band I am still a big fan of.”

Each project has morphed, their tentacles burrowing deeper into the eldritch foundations. While The Wizar’d favour occult, Sabbathian, fuzzed-out riff worship, Funeral Circle worship the epic doom, complete with heart-rendering, mournful vocals that cascade over Eastern-inspired harmonic scales.
“Solitude Aeternus is probably the doom band I’m most familiar with that used the more Near Eastern scales,” explains Barzegar, a self-taught guitarist who is a professed Aeternus fanatic. “According to Western music, they are not really Eastern scales because there are no microtones in the actual scale, because all Western music is based on 12 [equal intervals to the octave]. The one scale I’m very fond of is Phrygian Dominant; that has a very Eastern sound to it, but that’s a different mode of harmonic minor. Harmonic minor, in metal songs, it’s like Yngwie Malmsteen, it’s very Bach-ish, baroque sound to it.”
He continues, “When you switch around the order of the notes it sounds like something from the Near-East. It’s a really cool relation between the two notes, a lot of timing switches between the two notes, an Eastern Western dichotomy.”

This unusual approach shines on ‘Funeral Circle’, their full-length debut. Though the band’s tenure has thus far been marked by inconsistency, thanks to a incredibly small classic doom scene in Canada and a revolving door lineup, which has resulted in more than a few festival date cancellation, they’ve finally come together for a full-length, six years after their formation in 2007.
Comparatively speaking, when placed beside the band’s two demos, the seven-track disc is gorgeously rendered and tastefully realised. Gone are the earlier flirtations with hokey quasi-Satanic doom. The ridiculous maniacal laugh (check out ‘The Charnel God’ so you may chuckle in appreciation) is still present, but they’ve grown into the potential hinted at years ago. Thematically and visually, expect Zoroastrian cultural tropes, thanks to familial ties.
“My father is Zoroastrian. Outside of Iran, there is a community in India called Parsi, they are the continuation of the original Zoroaster’s in Iran, who migrated to India to keep their cultural and religious customs after the Arabs invaded,” explains Barzegar, who identifies as irreligious. Regardless, he finds Zoroastrianism, a religion and philosophy whose foundational beliefs are embodied by the contrasting Ahura Mazda (Illuminating Wisdom) and Angra Mainyu (Destructive Spirit), fascinating. “The cultural customs and the cultural lineage [are] very important to me.”
This importance is personified in subtle ways.
“It influences me more so for the motifs and themes that relate to Funeral Circle, more so than the lyrical content, which I try to keep a bit more vague or subtle. On our [2009 ‘Sinister Sacrilege’] EP, it wasn’t really that way, it was more Mercyful Fate, Satanic, blah blah blah,” he says, laughing. “I feel like I’ve moved on from that… I feel other bands do it better than us, and for that matter, pretty much everyone does it.”

Less subtle is the ‘Weird Tales’ author worship. On ‘Funeral Circle’, ‘Black Colossus’ is the story of the Hyborian Age hero known as Conan the Cimmerian; ‘The Charnel God’ channels the morbidity of Clark Ashton Smith. That, along with the Zoroastrian ties, is embodied by the striking artwork, penned by Martin Hanford. Metal fans may know him as the creator of artwork for Bal-Sagoth, Slough Feg, Solstice and Twisted Tower Dire. His creation for this little-known Canadian act is nothing short of striking, depicting a blazing brazier containing the revered great fire. It is surrounded by the stone renditions of ancient magi and roaring lions. Shadow Kingdom Records head Tim McGrogan was not being factious when he claimed, “If the fans voted on best album artwork, this would be the best of 2013.”
It’s not the only glowing praise they’ve rightfully received. Funeral Circle have embraced doom and it has embraced them back for their loving and unique bent on the genre, but one more luminary believes they are deserving of recognition, and he doesn’t make or sell their music. Fenriz, the usual champion of all that is blackened, crusty, and thrashy, listed them on 2013’s ‘The Underground Resistance’. His recommendation was glowing, brief, and gives the exact necessary facts.
Let us give him the last words: “Total cult heavy metal/doom/NWOBHM from Canada. Cult vocalist!”
He’s not wrong!