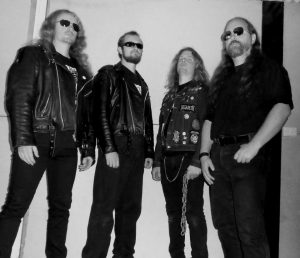 “This happened on the eve of recording his bass lines for the new album! He is currently undergoing rehab and will be home before the year’s end. We are currently putting together new songs and have whittled away at whatever we could for the album.”
This has not quashed future plans for the band, as they set their sights on rival gang territory New Zealand.
“Bigger stage shows, bigger hair, bigger crowds, bigger breasts. That’s it, and all.”

But what is it that separates this band from the other NWOBHM-esque bands already out there?
“I had some of our tunes written in the ‘90s, but did not even consider starting a traditional heavy metal band back then. We were there for the movements breaking out, even though we were very young ourselves. Johnny Touch is a lot less derivative of any one scene, than some of the newer and younger bands emerging.”

“It’s important we all preserve the molten spirit of metal in our own ways. The fact there is an injection of youth in heavy metal is a total blessing.”