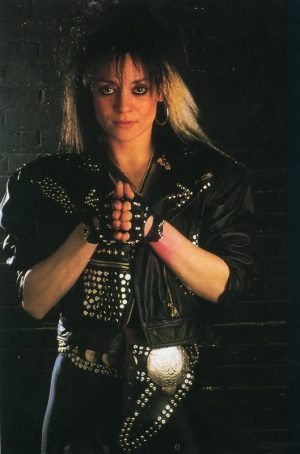 Then something changed, and Chastain has now returned in a classic guise: Leather is back from her self-imposed musical exile, bassist Mike Skimmerhorn has returned, and Mr David Chastain has recruited Stian Kristoffersen from Pagan’s Mind for drum duties. The appropriately titled and dynamic ‘Surrender To No One’ is the result of this reunion. Ignore the cheesy artwork; the record is a fantastic return to form, although the writing process was far more collaborative than historical precedent dictated.
“I forgot how much I missed, as I call in a loving manner, [David’s] masturbatory guitar solos,” says an appreciative and giggling Leone, who speaks to Iron Fist from her home in Marin County, which is across the Golden Gate Bridge from San Francisco. The area is home to the San Quentin prison made infamous by Johnny Cash, B.B King and Metallica, along with George Lucas’ storied Skywalker Ranch. “It just worked out… we’ve been blessed, I’ve been gone a long time and people are still interested, so you can’t say no to that.”

Following a successful run in the ‘80s, which resulted in two demos, their epic full-length debut ‘Mystery Of Illusion’ (1985), the revered gem ‘Ruler Of The Wasteland’ (1986), along with ‘The 7th Of Never’, ‘The Voice Of The Cult’ and ‘For Those Who Dare’ (‘87, ‘88 and ‘90, respectively) the band was riding high but burned out. Although they were doing well in the underground, they never quite managed to transcend beyond. Meanwhile, record executives were convinced if she just got sexier, bigger things would happen for Leone.
“I think about that all the time,” explains Leone. “It wasn’t anything we actually said to each other. We did the MTV run, and played a couple coliseums, but it totally wasn’t happening, and I think that we were tired. I, personally, was getting really frustrated doing all this when it’s not happening, so I kind of came away.
“I came home in the fall of ‘90, and in my mind I was saying ‘I’m just going to take six months off and just work on my health’, and it just didn’t happen. I have a bit of an ego, and I was actually doing demos for Vixen,” she laughs. “Oh my god, I’m sorry, you know, great band, but it really wasn’t my type of music. But nothing was really happening for me. I’ve always had an attitude, and all the labels met with me, but I’ve always had the thing… I wasn’t sexual enough, I wasn’t hot enough, so I was okay with just going away. I wasn’t going to compromise.”

That attitude is exactly what drew people to Chastain. Leone’s throaty, powerful growls accompanied the neo-classical shred loving guitar squeals of David Chastain, a seriously talented musician who has since appeared on over 50 releases in a variety of genres. Combine that with a driving rhythm section, appropriately gritty production, and ‘Warriors’ meets apocalyptic wasteland imagery and lyrical themes that Leone describes as “just enthralled with the destruction of man”, and you’ve got it. It’s the bigger balled underground version of early Warlock, with the crunch amplified and weepy ballads removed.
“I heard Ronnie James Dio in 1983 and it was over for me. I mean, I think every artist does this; I just tried to be like him on the first Chastain records, he changed everything for me,” gushes Leone. It was his untimely passing in 2010 that prompted Leone’s return to music as well.
“I didn’t do anything for a long, long time, and when Ronnie passed, Sandy had gotten in touch with me, and I started spending time in LA,” she recalls. “Sandy” is Sandy Ledge, the drummer for two of Leone’s other ‘80s era all-female projects, Rude Girl and Malibu Barbi. They teamed up with one-time Dio members Jimmy Bain and Scott Warren, resulting in the uneven ‘Sledge Leather’ album (2012). The recording prompted discussion between Leone and her old friend David. After all, the band that bore his namesake hadn’t released new material since 2004, and Leone’s replacement Kate French was now the mother of a young boy and fronting speed metal act Vainglory.
“I was talking to Chastain about it and he said ‘well I’ve got some material, let’s see if you’re interested in it’, and I said ‘well I have some too’, so we didn’t have the stress of… anybody breathing down our necks, so it really just happened naturally, because I wasn’t going to do it unless I knew I could do it well… We took our time and it just happened.”

Unlike the writing process for Chastain’s ‘80s era work, ‘Surrender To No One’ was a product of collaboration. Leone had honed her songwriting skills with ‘Sledge Leather’, and was eager to continue with the trend. In the past, the band’s prolific leader wrote the majority of the tracks.
“On this one, it really was not [like that]. Again, I’m lazy, people would write songs, and I’m lazy, so it was like ‘okay’,” explains Leone. Things then changed, and she was inspired to write for ‘Sledge Leather’. After all, David had no qualms about integrating her suggestions in the past.  “He was always wide open to my stuff. I don’t play an instrument, I just never wrote that much. Anything I’ve ever sent to him lyrically or melody wise, he would use. But now, it’s different. Now he says to me ‘Leather, I have written 2000 songs, whatever you want to do’, so we collaborated on all this stuff.”

Released by David’s own imprint Leviathan Records, the album sees a return to what Chastain does best, albeit in a more polished guise. Leone’s voice has astonishingly retained its power, despite the 23 years between Chastain releases.
“[American country singer] LeAnn Rimes said it a couple months ago on television, they said ‘oh you put out this new record’ and she looked at Oprah and said, ‘my balls have finally dropped’,” says Leone, laughingly disagreeing. She humbly continues, “The keys I can sing in now, I couldn’t sing in back then. Now I can do it, but to me, I listen to my vocals now and I don’t think they are as good. I don’t. But, a lot of, you guys don’t notice. I think it’s changed, but now again everyone is trimming down. I was listening to ‘Ruler Of The Wasteland’ today and oh my god, that horrible, shrill voice that I had, and like I said, my voice has dropped. A lot of people say that about my voice too, but you know what, I haven’t sung for 25 years. Everyone else has been on the road, beaten their voice up, I have not.”

Regardless of the specific vocal intonations, classic Chastain is back, and despite the celebratory fever that has accompanied that announcement, they are probably remaining as underground as they were previously.
“I understand a little more now. People think you make records, you tour all over the world. We’ve always been independent, we have no money,” explains Leone.  “[David has] got some medical issues going on, he doesn’t really want to travel. I personally tried to get something together in Germany where I’d just go and perform Chastain music, but yeah, there is nothing happening at this point.”
She concludes, “But you never know. I would still love to be a road dog.”