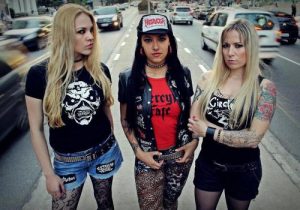 “I was inspired by something that happened to us and made me conclude that everything you do has a consequence. If you do bad things, bad things will come your way. If you can’t take responsibility for your decisions, you become a victim of yourself.”
Brazil’s Nervosa believe karma is a bitch and won’t blame anyone but themselves for life’s outcomes. It’s a philosophy that bassist/vocalist Fernanda Lira treasures and has made the dominant theme of debut album, ‘Victim Of Yourself’. Though, when you consider the stigma that unfortunately still follows the phrase ‘all-female band’ and their hailing from a country whose geography and infrastructure isolates them from the epicentres of metal business, Nervosa know they’ll have to work twice as hard to expose half as many people to their fiery thrash. Good thing they’re not afraid of a little elbow grease.

Both Lira and guitarist Prika Amaral (drummer Pitchu Ferraz completes the line-up) tell familiar tales of making developmental leaps from Maiden and Sabbath to Metallica and Slayer before becoming obsessed with “old-school American and German thrash.” They played in various São Paulo bands before stumbling upon on each other and the idea of getting rid of the figurative, and literal, dicks for a new band.
“It was really hard to find available and committed girls,” explains Fernanda about their keeping Nervosa an X-chromosome-only club. “Nowadays, there are plenty of girls playing metal, but three years ago, it was different. I was just about to quit looking when Prika got in touch saying she had a thrash project. It perfectly fit what I wanted to do!”

A three-song demo, an online video gone viral, shows with their heroes (Exodus, Destruction, Kreator), signing on Napalm’s dotted line, Prika recording through severe tendonitis, a Andrei Bouzikov-painted cover and their razor-wielding homage to machine gunning two-beats and Germany’s ‘Big Three’ is ready to blast off.
“We have plans and we’re [ready to] work really hard to make them come true! After releasing the new video and album we want to play a lot, wherever we can, new places in and outside Brazil!”