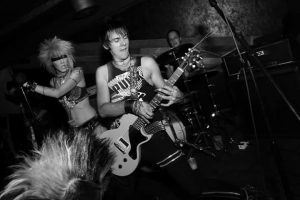 Classic heavy-metal! Punk rock! Women yielding swords! The recipe worked so perfectly with Iron Dogs so why shouldn’t it with Ottawa’s Zex? Especially since they have in common multi-instrumentalist and former Germ Attak and Cauchemar live member Jo Capitalicide… While Iron Dogs are “not doing much at the moment”, with no warning this quartet have just unleashed their debut EP ‘Savage City’ on Electric Assault, two tracks of sing-alongs and fist-banging that conjures the late ’70s spirit of both the nascent NWOBHM and glam-punk scenes, performed by a half-female, half-male line-up. “Zex was a long time in the making,” unveils Jo. “But the concept lurked in my mind for a long time before finally materialising. With the demise of Germ Attak in 2011, I ended up with loads of unused ideas that I started working on about a year later. Gretchen was to be our singer and Rick Morin, who played bass for Germ Attak on our final tour, was to be our lead guitarist but sadly, as we had no rhythm section at the time, he soon left. We had to wait until people moved to Ottawa to get a full line-up and since last November, we‘ve been rehearsing like crazy, four times a week. I’m writing songs so this is my top priority as we speak.” He denies this 50/50 gender ratio as being a gimmick (“it just happened”) and believes that with time, his love for punk and metal are more and more merging into one. ‘The Wanderlust’ and ‘Savage City’ were both recorded in February “on the first day of Ragnarok” and are illustrated by a cover penned by Jo himself, depicting “the theme of living a violent city life, about everyone pushing everyone because there’s not enough space”. Next stop, their first full-length. And until then, rock on!