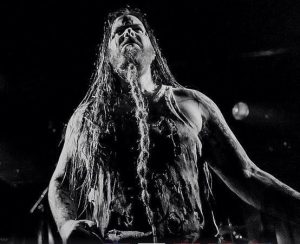 Having helped form Amon Amarth in 1992 and played on their debut EP and album, Anders Biazzi nevertheless chose to leave in ’98 to focus on his personal life. Only ten years later did the guitarist resurface, first with the gloriously old-school Blood Mortized and now with Just Before Dawn, a studio-project à la Probot. The formula is simple: first, a basic line-up – consisted of Biazzi, his BM compadre Gustav Myrin and Puteraeon’s Jonas Lindblood – record in his own studio what his creator calls with a wink “Streamroller death metal songs” about that immortal topic called war (“Mostly from the darkest times in the WWII but also from the future. We sometimes focus on a specific event, like the battle of the Bulge on the song ‘Bastogne’ or about the U-boats in the Atlantic with ‘As Death Breaks the Surface’ too.”) Then, various guest singers and drummers, “contacted through mutual friends or social networks”, pitch in, adding their own two cents to the recipe. With a total of twenty four (!) musicians involved, their second album ‘The Aftermath’ is an even more ambitious undertaking than its predecessor, ‘Precis Innan Gryningen’. It feels like a high-school reunion with Rick Rozz (Massacre), Dave Ingram (Benediction, Bolt Thrower), Mathias Lodmalm (Cemetary), Marc Grewe (Morgoth), Jonas Stålhammar (God Macabre, Bombs of Hades) etc. However, Anders doubts they’ll ever play live “unless some big festivals manages to get at least 20 of us in the same place at the same time”, but he seems content with the way Just Before Dawn was conceived and functions: “I have Blood Mortized to do gigs with and that’s all I need. Just Before Dawn is a fun project for me and we hope to put out an album every eighteen months or so. Plus the way I’m doing it ensures that no-one but me gets their dirty fingers in the composition!”