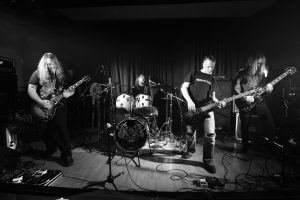 Epic! That’s the word that kept creeping up for those few who knew about Ocean Chief. Sadly, for far too long, there wasn’t that many of ’em, as these Swedes were just too weird, with their repetitive brand of Viking-themed swampy doom, even though they featured former Dawn and Regurgitate drummer, Jocke Pettersson, on bass. To add insult to injury, besides minimal live activity, when their releases weren’t criminally limited nature would get in the way – such as hurricane Katrina, which destroyed most of the re-release copies of their ‘Oden Sessions’ demo back in 2004! But according to guitar player and founding member Björn Andersson, also of Vanhelgd, it’s all in the past now, as testified by the release of a new album (‘Universums Härd’) only a year after the previous one (‘Sten’). “The 2000s were different in the sense that we were a three piece that rehearsed frequently,” he admits. “In the early days, we used to smoke pot and just zone out without much thinking about arrangements or song length. But after the recording of our third full-length in 2009, we really felt something need to happen to keep the spirit alive, hence the addition of a second guitarist and a keyboard player.” Asked to pinpoint what their whole concept is, Björn refers to the song ‘Oden’, particularly the phrase “Oden/Lord of bong/Lord of the universe”, which captures their peculiar mix of “Scandinavian mythology, weed-indulged lyrics and space, although it remains open for interpretation.” The new album, whose title can be translated as ‘The Core Of The Universe’, is said to be “very different”, with only one track going beyond the ten-minute mark, lyrics only in Swedish and “more melodies and up-tempo parts”, before adding; “But don’t worry, we still obey the doom!”