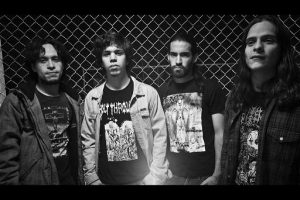 The band is based in Querétaro, 200 km North-West of Mexico City and where Disgorge or Hacavitz are also from. It was put together in the spring of 2010 by Héctor and guitar player Rodrigo: “The scene over here got boring lately, the new generation doesn’t have any ideas, nor dedication besides being ‘cool’. At least we have some good punk gigs here…”

They went for that unusual name because they didn’t want “to be just the local ‘Necroblastpheme’. We wanted to be different. So one day a friend of us came with that idea and we thought it fitted perfectly with the philosophical context we wanted to portray. It reflects the idea that the truth cannot be achieved in life form.” Produced by former Denial guitarist Roberto Ganaras, who had to do several different mixes to satisfy the band’s lust “for a level of atmosphere akin to of our favourite albums, organic without being overproduced with the right ominous vibe” and featuring nine songs (three being re-recorded versions of tracks from their 2012 demo), their debut album ‘The Doomed Passages’ is another proof that across the Atlantic, the heart of dark death metal still beats in Mexico…