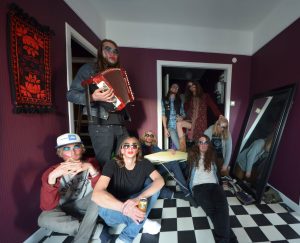 With a bizarrely titled debut album on a hot label, a penchant for really bad puns, and eye-popping, Jesús Franco-referencing cover art, Salem’s Pot has made an immediate impression in early 2014, not the least of which is thanks to the actual music therein, a lysergic combination of hazy psychedelic rock and woozy, lumbering doom metal. When asked about what inspired the Swedes to venture down the path forged by Black Sabbath and Hawkwind, guitarist/singer Knate’s answer is succinct. “Blues and hallucinogens; the same thing that inspired those bands. For us it always feels like they were on to something and they wanted to tell the truth. Whatever the path we choose, in the end, for us it’s all about reality. We live in a small town where it’s really hard to find people to play with, but we found each other eventually. We were all lonesome riffers that just worshipped sleazy old slasher-movies before we came together. But we still don’t have a permanent drummer so we haven’t really come together completely just yet.”
Released on California’s EasyRider, a record label that’s on a seriously impressive roll these days, ‘…Lurar Ut Dig På Prärien’ might be comprised of only three tracks and a 33 minute running time, but its conciseness is perfectly executed, leaving listeners immediately wanting more. Thankfully, however, it appears folks won’t have to wait long for new music. “There’s always a ringing in my head and making more music is about the only way to make it go away. We’re gonna enter the studio this week to record some new material, one of which will be a country-like song. Right now we just want to work on something new since we’re done with the last recording. I don’t want to jinx it by giving too much away.”