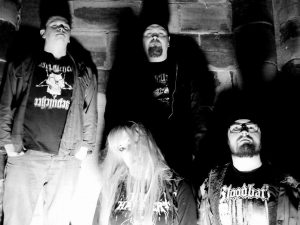 Linus has since departed the band, replaced by Ian Hunter and, in the last nine years, the four-piece have put out a demo and an EP, as well as two splits with Abigail and Firstblood, Diskelmä and Satellite. About to release their debut album ‘Usurping The Throne Of Disease’, Kat and co’s self-proclaimed brand of “apokalyptic death crust” encompasses influences from the likes of Wolfbrigade, Disfear and Martyrdöd, while pooling together their loves of death and black metal with definitive nods to Napalm Death. “Over time our sound has evolved a bit, become more death metal, overall, I guess”, admits Kat. “There is still plenty of raw punk aggression going on in our music but on the album there is definitely more death sounding riffs than ever.

“You can expect a mix of old school death/black metal with raw thrashy crust/kängpunk aggression,” she reveals, speaking of the new record. “You get just under 35 minutes of pure fucking apokalyptic aural armageddon. All the songs were written specifically for the album, apart from ‘Into The Darkness Of Eternal Nuclear Winter’, which we originally recorded for the split with Abigail back in late 2011; but the new version is more aggressive, faster and raw, in my opinion, while the vocals are stripped down.”

As well as including more death metal influences, the upcoming album also includes a couple of special guest appearances; one from Fred Estby (Dismember/Carnage) providing growls (he also mixed the record) and another from Robert Pehrsson (Death Breath) playing guitar. According to Kat these were both last minute decisions but have made the album even better than Winds Of Genocide intended. “Robert works in an office just down the corridor from Gutterview Studios [in Stockholm] where the vocal tracking and mixing was based. On the last day, I was in the studio and there was a part of a song where I wasn’t planning to do any vocals, but Fred thought it sounded a bit bare and needed something in there. He suggested a guitar solo and said he would ask Robert if he would do it, Robert agreed and laid down an absolutely awesome solo, which blew us all away when we heard it,” Kat recalls. “I wanted some guest vocals on the album, so I said to Fred ‘why don’t you do some?’ We did some vocal exchanges, we trade off vocals in one section and in another section he does punky screams/shouts over my growls! Those two guest slots were not planned, but it is really cool they happened. I love Death Breath so to have Robert guesting on the album is awesome and it is great to have Fred involved as a guest and also with the vocal tracking and mixing as he is someone who I have respected for many years and I grew up listening to Carnage and Dismember.”

After seeing almost a decade of hard work come to fruition in the form of their upcoming debut, Winds Of Genocide are preparing to promote the album with a swathe of live shows and are a force to be reckoned with. The forthcoming release is accompanied by a viciously sinister warning from front-woman Kat; “A new storm of aural Armageddon has arrived… prepare to be swathed by the black wings of death!”