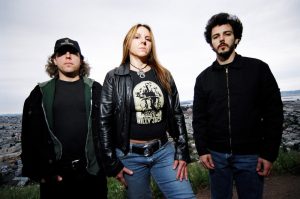 “I’ve had too many shitty beers for any words of wisdom!” laughs Lori S, vocalist and guitarist of doom band Acid King after their show at Desertfest London. Right from the beginning it’s apparent that this vibrant and charismatic woman has a no nonsense attitude that she carries over into her approach to music. From Acid King’s very beginnings in the early 1990s Lori was the driving force behind its inception, with a clear vision of what she wanted and where she wanted it to go. The tenacious frontwoman had even picked a name before she’d even thought about band members; “I read this book called ‘Say You Love Satan’ – a true crime book – and there was a bit about Ricky Kasso. I remember on one of the pages, which we have a song about (‘One-Ninety-Six’), it said ‘Nobody messes with the Acid King!’ When I read that, I said ‘I’m gonna name my band Acid King!’ So I already had the band name before I had the band, because of that book.”

Having moved from Chicago to San Francisco, and predating the days of the internet, Lori had to call upon her resourcefulness in order to fulfil her dreams of starting a band. Taking out an ad in a local paper, she recalls how everything fell into place; “I met our first bass player through that ad, and then I was at a party and I yelled out ‘Is anyone here a drummer?’ and our current drummer yelled back “I’m a drummer!” and that’s how he joined the band. That’s how Acid King formed; an ad in the paper and a drunken party.”

Although these days you can’t throw a stone without hitting a stoner band playing the same tired, old riffs, Lori is proud that Acid King are one of the trend setters rather than followers. “Back in those days there was Monster Magnet and Hawkwind, but there wasn’t that many bands like ours. I didn’t even know who Sleep were,” she tells us. “Our sound is something that has gradually progressed. When we first started out, I was into all of the obvious stuff, you know, like Black Sabbath, but was also listening to Sub-Pop. There’s a lot of different influences in my history, and my musical history, that were an influence to the band.”

Acid King is very much Lori’s baby and although there was a ten-year gap between the last record ‘III’ and most recent ‘Middle Of Nowhere, Center Of Everywhere’, she is keen to point out that the band weren’t simply laying dormant, instead keeping up a routine of rigorous touring and battling the torments of everyday life. “People got married, and then divorced, people got laid off; there were a lot of different things going on in our lives, and so we weren’t so active with the band”, she explains. “But then we started getting offers to play in Europe, and we were like ‘Wow, there are fans out there, these people are into the band?’ so we kept going, but even the drummer left for a year. Many bass players left too, but I just kept it going, then I realised that we really needed to write a new record, because fans were asking. It took a long time and it wasn’t because we took a long time writing it, it was because being in a band isn’t our full time job, so we just did it when we could; after work and on weekends.”

Despite things being great for the band currently, it hasn’t all been smooth sailing and, even though Lori oozes confidence, there have been times where she’s doubted herself and the music. “When you’re in a band for 20 years it’s like being in a relationship; things aren’t always great”, she says wistfully. “There was a time after Man’s Ruin [the band’s former label, which became defunct in 2002], where I felt like the music really didn’t have anywhere to go; it didn’t have a place or a genre and I was worried we were becoming complacent as a band. However, we decided to carry on regardless of whether people liked the music or not, and our diligence seems to have paid off!”

It’s Acid King’s refusal to give up, even in the face of hardship and existing at a time when the doom scene is fraught with plagiarism that has allowed them to create newest album ‘Middle Of Nowhere, Center Of Everywhere’. And, of course, the title of the record had already been decided years before by the band’s veritable powerhouse of a frontwoman. “We were touring in Europe and we were going somewhere in Belgium, driving through grass and barns; I was like ‘Where are we going? Where are we playing?’ because it wasn’t in a big city”, remembers Lori. “We ended up at this community centre with all of these cows and chickens, and I said ‘We’re in the middle of nowhere!’ and this guy said to me, ‘Well, some people might say you’re in the centre of everywhere’ and I’ve always remembered that, so when I came to name the record I named it that, because that had really stuck with me.” Seemingly every detail of this album has had careful planning put into it, as not only the title but the artwork also was pre-determined. “The artwork is by a tattoo artist Tim Lehi,” Lori explains. “He had this drawing that he’d done years ago, and I’d always loved it, it has everything I love; space and wizards and tigers. I asked if he’d be willing to change it around for the album cover and he agreed.”

As well as kicking ass fronting her own band, Lori has also contributed towards other people’s. Most noteworthy are her vocal contributions to Boris’ ‘Heavy Rocks’, not only for the sound but in the unconventional manner in which they were recorded. “We played with Boris in Japan and they asked me to contribute some vocals to ‘Heavy Rocks’,” she smiles. “I did it over the phone! They called me up at 8 o’clock in the morning and they told me to read this, and I didn’t even know what the music was going to sound like, but I just did it and it ended up on the record without me having any idea of how it would sound or what the context of it was!”

On the flip side, with the amount of work that Lori has poured into her own album it’s easy to see why she is eager to point out that the record belongs to Acid King and Acid King alone. “This record is mine, Svart are just licensing it and releasing the vinyl. Everything still belongs to Acid King, we didn’t want to sign to a label. We wanted to release our own record, but we needed to license someone to put out vinyl and CDs.” While insistent that Acid King aren’t signed to Svart, Lori lends high praise to the label and chose them especially to handle the release. “Svart has quality vinyl and CDs, their packaging is always great,” she says. “I thought ‘This is what I want for my record’ and they were happy to do it, so it worked out awesome!”

“We’ve been to Europe five more times than we’ve ever toured the US,” Lori ends our conversation, slightly bemused, so it’s with this that Europe has to kiss goodbye to Acid King for the time being, as they embark on their first home country tour in more than a decade.