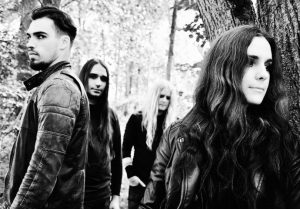 From the primitive scars carved out of early material Secrets Of The Moon have flourished and blossomed, never stagnating and always exploring new ground. One thing that was probably never expected though was the German troupe going conceptually in search of the sun. After all their last opus ‘Seven Bells’ was full of obsidian blackness owing not a small amount to the comparable nightmarish visions of Lars Van Trier’s ‘Antichrist’.
Rest assured though, there is no case of lazy sunbathing going on here. Founding member sG illuminates us on the origins of the album and explains it comes from a very dark place indeed. “When we finished the ‘Seven Bells’ album/touring cycle our former bass player and close relative [LSK] committed suicide, our long-time drummer Thelemnar left the band and my mother died of cancer only one month before my daughter was born. I experienced the mysteries of farewell, death, life and birth to an extent I haven’t ever done before. That’s why the album was such a relief to write because I was unable to speak for a long period of time. It showed me how much I needed to make music to survive. The actual title ‘SUN’ is taken from a line in the song ‘Worship’ (from ‘Seven Bells’) which says Towards a new sun at the end of the world. It was in my mind all the time when I composed the songs for ‘SUN’. It had a positive effect on me, painting those inner pictures that should become my songs.”
There are a wealth of ideas running through things both musically and narratively here, one thing that had us taken aback stylistically were similarities to a certain thin white duke, could the influence of Bowie on songs like ‘Dirty Black’ be hanging over things? Although stating he only knows the more famous numbers sG remarks that he “got a mail from my friend Jarboe a while ago. She told me I sounded like a young David Bowie. I felt humbled because I’m not a good singer at all.” Elaborating on this he tells us “music-wise, the French band Air inspired us to develop the sound of ‘Dirty Black’ and we all became huge fans of ‘Sister’, the latest In Solitude album. It’s a pity they stopped, because the sound of the band was unique in the end. Then there’s this album ‘It’ll End In Tears’ by This Mortal Coil. The instrumental song ‘Fyt’ came very close to me. I think death (and how it may sound when you die) is captured here in the very best way possible. Well the whole album is brilliant and it became pretty much the ‘SUN’ soundtrack.”
Another thing that strikes is the apocalyptic message behind songs like ‘Hole’. Does sG think that things are spiralling out of control in this world considering everything that has been happening of late? “I didn’t particulary write things to focus my anger on today’s world situation. But when the terror in Paris happened I knew there was no better song to be released only a few days after. It describes the desolate story of humanity in a very nihilistic way. Whatever we do, whatever we create, whatever we love, is only temporary.”
If there is going to be a future – apart from a tour with Dodheimsgard in the offing – what does it hold for the band? We ponder the question that if elementally ‘Seven Bells’ is the earth and obviously ‘SUN’ the fire, could there be an air and water to come? “Interesting,” comes the answer, “we should go for the other elements on our future endeavours. I have never thought about that before”