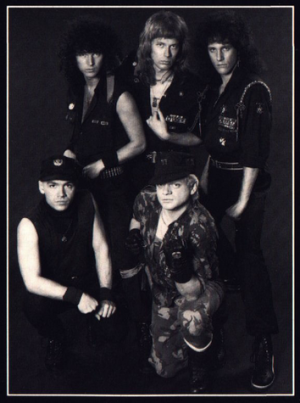 There’s a moment near the end of the post-apocalyptic video for Accept’s breakthrough hit ‘Balls To The Wall’, right at the moment the song’s climactic bridge kicks in, when suddenly a massive gust of wind whips the hair of the band and rain starts pelting the camera lens. For a song already so thunderous, it’s a perfect moment, so much so that one could be led to believe it was choreographed, but as it happens, it was all just a stroke of luck. Frigid, frigid luck.
“It was miserably cold,” says guitarist Wolf Hoffmann, speaking on the phone from his home in Nashville, chuckling about the lengths the German band would go to make an impression on the public. “It was in the fall, might have been November, that time of year when it’s wicked cold. Of course we had to wear all the cool outfits on the stage, the leather pants. And we were literally freezing our balls off. Literally. It was nasty.”
“It was bitter cold, it was windy, it was raining, and we were outside on this stage,” elaborates former drummer Stefan Kaufmann from his home in Germany. “We were hungry and tired, and we were in a bad mood. It was so windy the Marshalls were blown off the stage. It’s not a wind machine in the hair of Jörg [Fischer] and Wolf and Peter [Baltes]. That was real wind, and it was hilarious. Unbelievable. I had rented drums, but the guitar players had their real instruments there, and they were all wet. In the end they had to clean them like a gun, take everything apart and get the water out. It was an extraordinary adventure for us.”
As brutal an experience as that was, the video for the first single off Accept’s fifth album, filmed by Julien Temple – the most in-demand music video director in the world at the time – would be the turning point in the band’s career. That one clip, which looked far more professional than the usual metal videos that either poorly mimicked ‘Mad Max’ or lazily showed a band miming on their stage set, would reach millions of young viewers, and become a surprise hit in North America. Here was a strange looking band, featuring a hobbit-sized, gravel-voiced drill sergeant flanked by tall leather-clad guitarists sporting matching Flying Vs, that suddenly was catapulted to the upper tier of heavy metal.
“I remember [Temple] was a guy we were kind of gently forced to use,” reminisces Hoffmann. “We didn’t know anything about him but the record company suggested him. ‘Don’t worry, he’s the best’, that sort of thing. We didn’t really know what to think of him, we just knew he was famous. We liked the concept, and we liked the fact it had the wrecking ball. That was pretty damn cool for those days. It was a big budget production, and it happened to be at Heathrow airport. I guess they found a building that was supposed to be demolished, and it happened to be an old Black & Decker factory building. They set up the stage, the lights and all that, and there was so much light that planes coming in to Heathrow for landing were complaining on the radio that there was too much light and they were getting blinded.”

That Accept was on the cusp of success by 1983 was no surprise to either the band or industry insiders. After working hard on their craft since the 1970s, the pieces started to fall in place with the release of the 1981 album ‘Breaker’ and especially the acclaimed ‘Restless And Wild’ a year later, which is universally regarded as one of the most important and influential German heavy metal albums of all time. However, the follow-up ‘Balls To The Wall’, released in December 1983, would not only go on to be the band’s biggest-selling record, but to the band’s four core members Hoffman, Kaufmann, bassist Peter Baltes, and singer Udo Dirkschneider (Jörg Fischer served as rhythm guitarist in a touring capacity only) it remains the one album they look back on most fondly. It’s the climax of an incredibly productive period for the band, where youthful ambition and the willingness to put in genuine effort paid off in a huge way.
“We were a band that was rehearsing every day,” says Kaufmann. “From the first days when I joined the band in 1978, we were more or less meeting in the rehearsal room every day, every evening, constantly rehearsing, writing, trying things out. There was always a constant flow of new material. So when we started to get more successful we were touring more and had extra things to do, but still in the time between tours we were still rehearsing and writing. That was still the case with ‘Restless…’ and ‘Balls…’. The first time we went out to write for an album was for ‘Metal Heart’ [1985] because we didn’t have the time with the world tour, we went to America to write it. But all the albums before that came to us by daily work.”
Recorded in Dierks Studios in Cologne, Germany over the summer of 1983, the career-defining ‘Balls To The Wall’ remains a ferociously heavy record, thanks to a robust foundation of bass, drums, and rhythm guitar that was recorded under unique circumstances. According to Kauffmann, “Dierks Studios was still not quite finished, so Peter and I with the drum kit were in a huge room that was not really done. There were raw concrete walls, there was sand and bricks lying around, and after the recording sessions the drums and the other instruments looked like we were playing in the desert. But the room sounded so great because it was big and hard, we had hard reflections. They had to hook up special headphone lines because the control room was at least 50 or 60 metres away on the other side of the building. All the microphone lines had to be tied from there to the control room, so that was a kind of funny setup. When I listen to the album I still can hear this room, especially when I hear the drum sound.
“We set the drums up in the middle of the room, this room was at least 15 by 15 metres, and easily six, seven metres high, with raw concrete walls, so when you hit the snare it really was like an explosion. We set things up in the usual recording booths as well, but we recorded lot of overdubs in this huge, dirty room. Tubular bells, tympanis, acoustic guitars, gang vocals. It sounded so great. And in the end, when the room was finished, when it was nice, it didn’t sound as good as when it was totally empty,” he laughs.

Hoffmann’s personal situation in 1983 lent a particular challenge to his work as a musician at the time. “I was so young, I was in the civil service in Germany,” he says. “We had the draft in Germany back in those days, we had to do military service. No musician ever wanted that because it meant leaving the band, cutting your hair, and going away from home for a year and a half – and I didn’t want that for sure, so I opted for the civil service instead. I was working in a hospital doing cleanup and other chores, and it was the last month of my civil service, and I went to the recording studio at night and on weekends for a few weeks recording my guitar parts. It was a strange scenario.”
Even though the band had no way of knowing the title track would become a massive hit, universally regarded as one of the greatest heavy metal songs of all time, they did sense they had something special on their hands. And typical of so many classic songs, it was written with surprising ease. “We all knew when it happened, and I remember still to this very day, we knew it was good,” Hoffmann explains. “I remember the feeling, thinking, ‘is this real, or has this song already been done by somebody else and we don’t realise it?’ Because it all fell in place so easily. It felt so right and so perfect in a way that when we all did the first demo for it, I was like, ‘Whoa. This is good’.”
Adds Kaufmann, “We were rehearsing, and I still remember exactly that Wolf came up with a riff and a hook line, ‘Balls to the wall…’ Peter constructed the bridge part with the bass notes staying in one level with the guitars changing. I obviously came up with the rhythm and tempo. So this song was done in half an hour. Then in the studio we came up with the melody and the extra part in the middle.”
“I had been thinking of the expression, ‘balls to the wall,” continues Hoffmann. “Gaby [Hauke, manager] said to me, ‘Man, somebody called you guys “balls to the wall” in Kerrang! magazine. I like that expression, we need to have a song called “Balls To The Wall”.’ So I was sitting there, letting it roll off my tongue, and eventually I came up with that riff in the chorus. I remember it very well, the difference was, I played it to Stefan and the guys on a tape recorder, and I was singing, ‘Balls to the wall, baby, da-da dada da da, balls to the wall, baby.’ They were like, ‘No, you can’t sing, ‘baby’’.”

‘Balls To The Wall’ remains an extraordinary five minute and 43 second epic, a dystopian rallying cry for the oppressed, drenched in murky atmospherics, featuring a commanding vocal performance by Dirkschneider, and bolstered by backing vocals so ominous and cold that it fit the very mold of “Teutonic”. And who can ever forget that spine-chilling cracking sound midway through, followed by Dirkschneider’s menacing narration?
Come on man, let’s stand up all over the world
Let’s plug a bomb in everyone’s ass
If they don’t keep us alive
We’re gonna fight for the right
Build a wall with the bodies of the dead, and you’re saved
Make the world scared
Come on, show me the sign of victory
“That bone-cracking sound? You know what that is? It’s Udo and his teeth,” reveals Hoffmann. “He had this weird ability, and I bet you he still does, where he’d just sit there and drive us crazy sitting in the back of the room, not saying anything and just grind his teeth. He’d make this awful sound. Terrible. And we said, ‘You gotta make that sound on the song.’ So he did. Obviously you have to go really close to the microphone, grind your teeth, and that’s the sound you get. And you gotta have teeth like Udo’s to make that happen.”